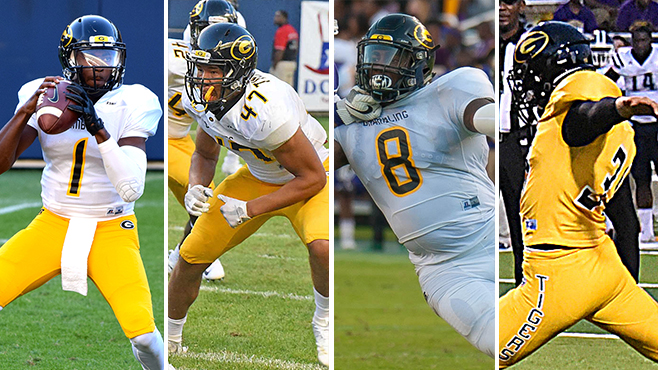 Tigers make it a grand slam in week six.

Football Players of the Week: Week 6

Kincade threw for 265 (14-of-23) and three first-half touchdowns as Grambling State picked up its fourth straight State Fair Classic with a 34-21 win over Prairie View A&M. Kincade was 9-of-13 in the first half for 226 yards and three touchdowns (16 yards – Darrell Clark; 29 yards – Darrell Clark and 12 yards – Lyndemian Brooks). His three touchdown passes aided the Tigers to a commanding 31-7 halftime lead.

Hogues finished with five tackles, including three sacks for a loss of 24 yards. Also, he forced a fumble in Grambling State’s 34-21 victory over Prairie View A&M in the State Fair Classic.

Mullins, who played in his first game of the season, led the Tigers with six tackles, including three solo stops. He had a pair of sacks for three yards and 2.5 tackles for a loss of 10 yards. Grambling State defeated Prairie View A&M 34-21 in the State Fair Classic.