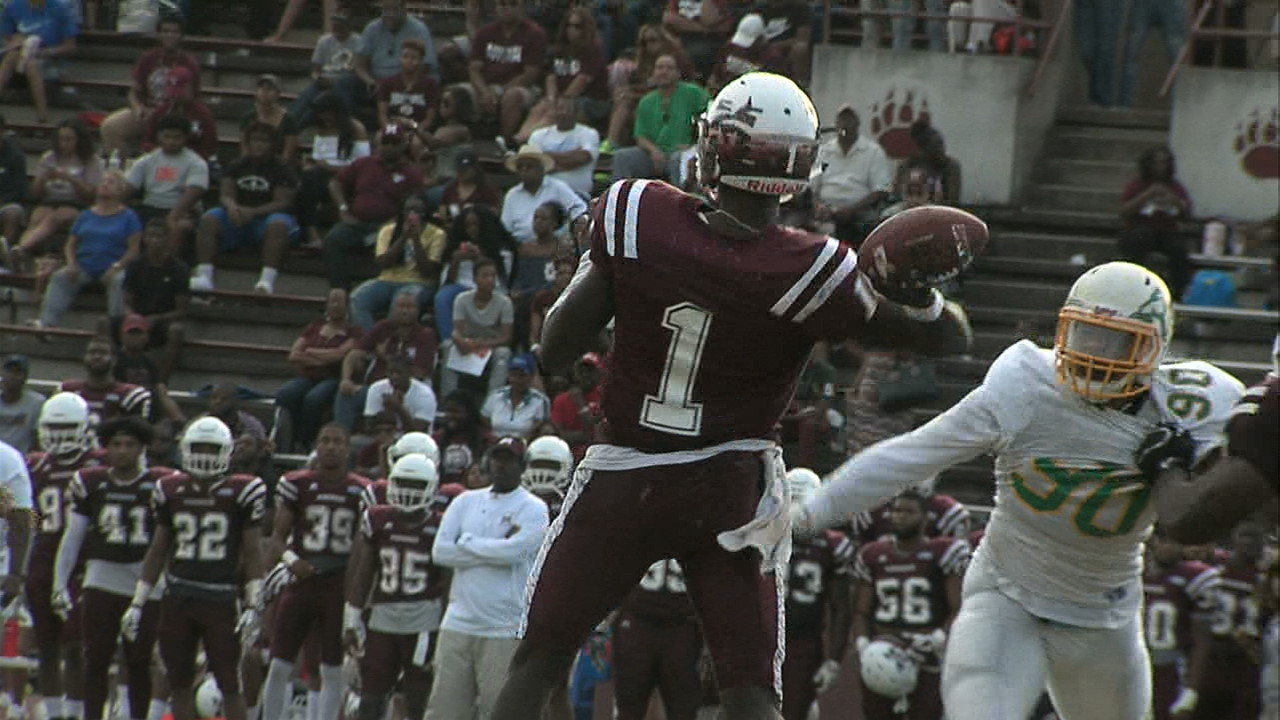 The difference a week makes.  Kentucky State’s (2-3) quest to start 2-0 in SIAC play was halted by a Morehouse (3-2) team still smarting from a tough loss the week before as the Maroon Tigers beat the Thorobreds 31-21 in Atlanta. The Thorobreds were looking to build momentum off of their Circle City Classic win a week ago, but a bobbled punt late in the fourth quarter all but killed a chance for the visitors to win it on the road.

Morehouse scored in each quarter in what quarterback Kivon Taylor called the first complete game of the season for the Maroon Tigers.  Taylor kicked it off with a 23-yard touchdown pass to Frank Bailey to put Morehouse ahead early.

Kentucky State responded later in the first with a nine play 73-yard drive to tie it at seven.  Paul Campbell sealed the drive with a six-yard touchdown to Jordan White.

Both teams exchanged scores in the second quarter with Taylor first finding Amyr Smith for a 24-yard score.  Kentucky State responded three minutes later when Brett Sylve mishandled a punt but caught it off the bounce and raced 85 yards for the score. The bobble threw off the timing of the defense just enough to give Sylve a wide open lane all the way down the field.  Morehouse took a 17-14 lead into the break after a 37-yard Fernando Sdelamora field goal.

Kentucky State took its first lead of the game early in the third when Sylve torched the Morehouse defense on a 24-yard run.  But the lead wouldn’t last for long.

Taylor put together a quick hitting drive two possessions later that ended with Ricci Nuckles getting behind the secondary for a 78-yard touchdown.  Morehouse went up 24-21 at that point and the vibe in the AUC felt like whoever had the ball last might pull it out.

The defenses held for the rest of the third and most of the fourth period with three points still separating the teams.  With just over six minutes to go, Sylve was back to field a Morehouse punt and the ball bounced off his chest as he waved for the fair catch.  Unlike the first half, there wouldn’t be a lucky bounce this time for Sylve.  Morehouse scooped up the loose ball at the Kentucky State 34 yard line with great field position and momentum.

Taylor, who passed for 373 yards on Saturday, put together the final scoring drive of the day. He hit Tremell Gooden for a 32-yard touchdown that put Morehouse up by ten and that was enough for the win.

Morehouse moves on to Columbus, GA next weekend for the Tuskegee-Morehouse Classic.  Coach Richard Freeman told me after the game that Columbus is more like a home away from home for Willie Slater and his Tuskegee team because of Slater’s ability to recruit that area.  But that’s classic Freeman, serving up praise for his opponents publicly, while passionately getting his team up for the challenge in private.

Kentucky State ends a two-game road trip for a brief return home to Frankfort.  They will take on West Virginia State next Saturday for Senior Day.