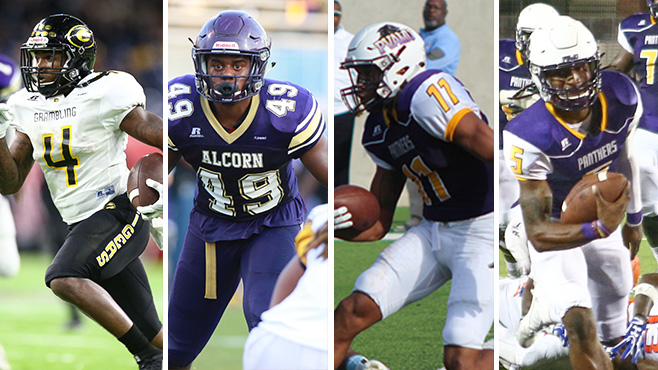 Carter had 206 total yards of offense in a 23-10 win over Northwestern State on Saturday. He carried the ball 20 times for 138 yards, including a long of 50 yards. His two-yard rushing touchdown gave Grambling State a 7-0 lead just 59 seconds into the game. Carter caught the first pass of the game for 60 yards and finished the night with two receptions for 63 yards.

Solomon Muhammad (LB, SO, Birmingham, Ala.)

For the second straight week, Muhammad stood out for the Alcorn defense. He registered nine tackles, four tackles for a loss, two sacks and a pass break-up in Friday’s 17-10 defeat against FIU at Legion Field. One of his sacks resulted in a second and 35 for the Panthers. Muhammad’s performance came after he tallied a career- high 10 tackles in the season opener.

(85) against the Bearkats. Of his returns, four were 20 plus yards with all four of those returns leading to Panthers touchdown drives.  Floyd also rushed two times for 20 yards and caught two passes for 12 yards.

In his first start in a PVAMU uniform, the redshirt junior had 280 total yards and led the Panthers on four scoring drives in a 44-31 defeat against FCS #3 ranked Sam Houston State, three of which were touchdown drives. McCullers also rushed 14 times for 126 yards and one touchdown (one-yard run) and completed 16-of -30 passes for 154 yards.