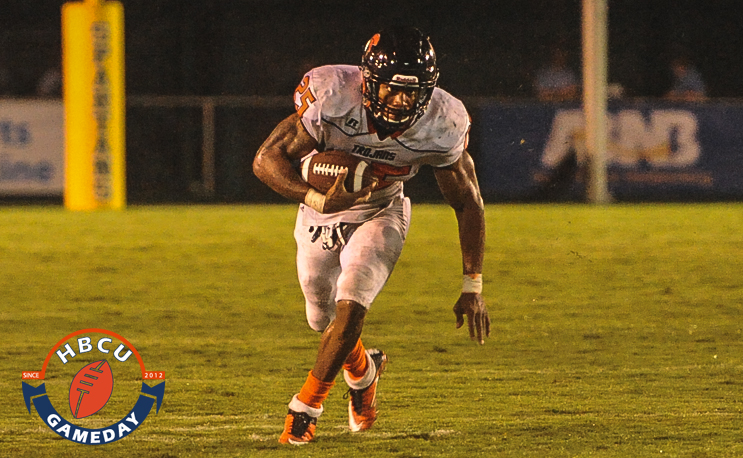 Virginia State ran Johnson C. Smith out of its own stadium thanks to a big day from Trenton Cannon.

VSU jumped ahead early after Trenton Cannon bolted 62 yards for a score. Cesar Alfaro’s point after gave VSU the 7-0 lead with 4:56 to play in the first.  JCSU responded when Denorris Johnson (Winston-Salem, N.C.) hauled in a 40-yard strike from junior quarterback Terrance Ervin (Richmond, Va.) to pull to 7-6 with 33 seconds left in the opening quarter.

It was all Virginia State after that, as Cannon scored two more touchdowns, the first on a five-yard run and the second on an 11-yard pass from Cordelral Cook to push the VSU lead to 21-6 at the break.

The Trojans got a 15-yard touchdown reception from Carlton Campbell in the third and added a safety with 23 seconds left in the third quarter to go ahead 30-6.

The 44-6 final was provided in the fourth quarter when Cook raced 49 yards for a score and Willie Stubblefield capped the VSU scoring with six-yard reception with 2:42 left.

Collectively, VSU rushed for 346 yards and limited JCSU to 91 yards on the ground.  Cannon finished with 152 yards on 20 carries and scored three times. That performance comes on the heels of the 145 yards he put up in VSU’s season-opening win against FCS Norfolk State in Week One.

VSU also had 170 yards through the air compared to the Golden Bulls 103.

Individually for JCSU, Ervin finished with 40 yards rushing while sophomore teammate Braxton Gambrell (Seneca, S.C.) had 37 on the ground.  Ervin also finished with 103 yards passing on an 11-of-25 outing while tossing one touchdown.