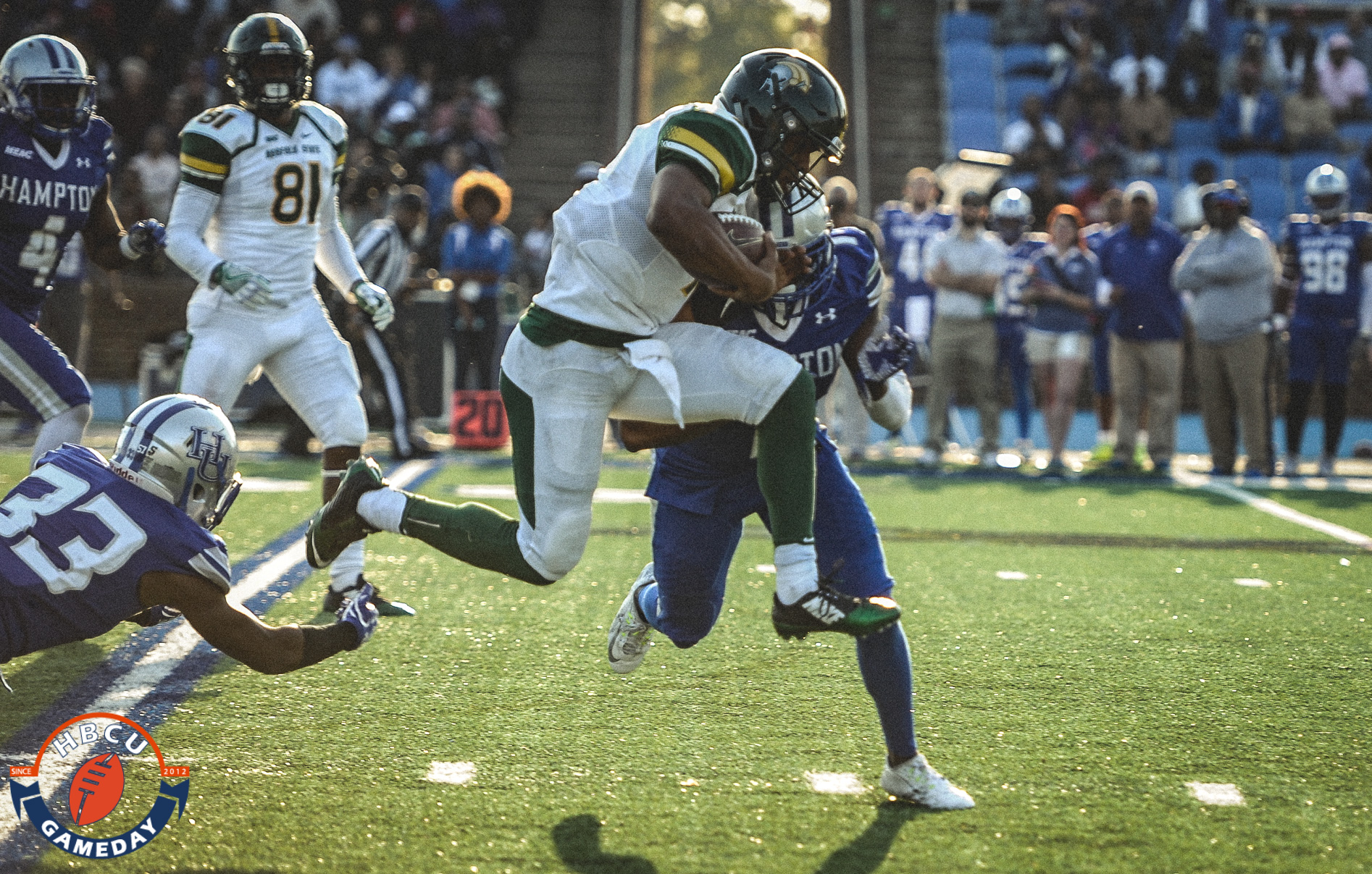 NORFOLK, Va. – Norfolk State head football coach Latrell Scott said prior to training camp that one of his main goals was to establish quality depth and competition prior to the start of the season.

In the Spartans’ first preseason scrimmage on Sunday, NSU took a strong step in that direction, as newcomers accounted for all five touchdowns in a two-hour simulated game at Powhatan Field.

With several of the team’s upperclassman leaders playing limited snaps or sitting out the session altogether, the youngest Spartans had the opportunity to shine and made the most of it. After the NSU defense forced two changes of possession to start the day, freshman quarterback Juwan Carter led the second-team offense on a 16-play, 80-yard touchdown drive. Carter completed 8-of-9 throws on the drive, which was capped by a 5-yard TD pass from Carter to freshman back Shedrick McCall III on 3rd-and-goal.

“For “Pootie” to come out and lead an 80-yard touchdown drive on his first collegiate drive, that was impressive,” Scott said.

The Spartans’ other freshman signal-caller, Tripp Harrington, was under center for NSU’s next touchdown. With the offense starting from the plus side of the 50, Harrington got the Spartans into the end zone in just five plays. He found rookie wideout Isaiah Winstead on a deep ball down the right sideline for a 27-yard TD pass. Winstead snared the scoring pass through tight coverage – a defender was called for pass interference on the play, but the freshman made the touchdown grab, nonetheless.

Said Scott: “That was a big-time throw by Tripp and a big-time catch by Isaiah.”

Carter kept the momentum going while working with the first string on the next possession. Starting from the offense’s 4-yard line, the Spartans embarked on a 96-yard TD drive. Carter recorded runs of 17 and 8 yards and completions of 10 and 18 yards to Floyd Jones and 23 yards to McCall to set up the offense with a first-and-goal. Carter ended the drive with a 1-yard TD run on 4th-and-goal.

The defense stiffened after a break for special teams work. Freshmen Nick Ackies and Matt Hodges has tackles for loss on back-to-back plays which both would have resulted in safeties under normal game conditions. Fellow rookie De’Shaan Dixon and redshirt freshman Dominique Houston had bookending sacks to end another drive, while Dixon also came up with an interception after deflecting a pass at the line of scrimmage later in the day.

Freshman Josh Nardone kicked field goals of 39 and 31 yards during the team periods, and alternated with junior Bo Lomax for a strong showing on field goals during special teams periods. Defensively, freshman nose guard Tavien Blackwell was in on three tackles for loss, while Ackies and senior linebacker Kyle Archie both made a pair.

“We rested some of our upperclassmen today because we know what a lot of those guys can do,” Scott said. “We wanted to give the young guys the opportunity to get a lot of snaps in and make some plays. We need to clean up a couple of the penalties we had early on, but overall, I thought it was the cleanest first scrimmage we’ve had.”

The Spartans, predicted to finish seventh in the MEAC this year, have one more full week of training camp remaining before fall semester classes begin. NSU’s next scrimmage will be its annual Green & Gold Game next Saturday at 6 p.m. at Dick Price Stadium. Fans and former players are invited to take part in the Spartan Walk and greet the Spartans as they walk from the library to Gill Gym beginning at 3:30 p.m. Admission to the scrimmage is free.