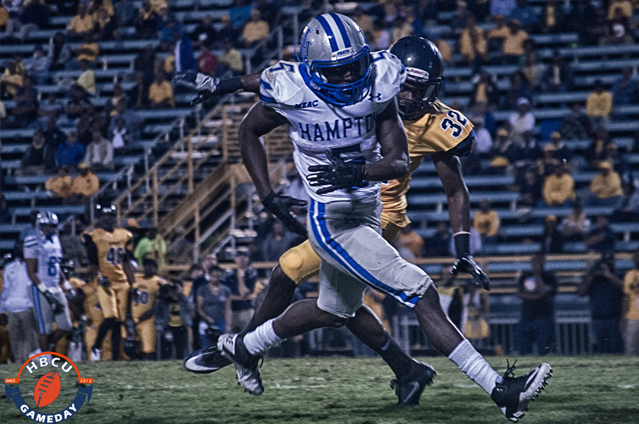 Is this the year Hampton finally breaks through?

It’s no secret to anyone paying attention that the state of North Carolina has run MEAC football for the past two seasons. North Carolina A&T and North Carolina Central went a perfect 14-0 in 2017 vs. the rest of the MEAC and 13-1 in 2016.

Meanwhile one of North Carolina’s favorite HBCU football sons, Connell Maynor, has had to take a backseat to his alma mater (A&T) and its rival (NCCU) as his Hampton team has gone 0-4 vs. those teams while going a respectable 10-6 against the rest of the conference during that span.

Maynor knows the stakes are high as he enters his fourth season with the Pirates.

“Finished behind Central and A&T. Both coaches (Jerry Mack and Rod Broadway) doing a great job with their program. We’re right there behind them and our guys kept fighting and we’re looking to make that move this year.”

Leading the way for Hampton will be a defense led by Steven Smith and Brendan Cole, as well as first-team All MEAC selection Yahkee Johnson at running back.

Hampton has re-tooled its coaching staff, bringing in several new assistants to the program, including two who worked with Maynor to help lead Winston-Salem State to the NCAA Division II title game in 2012.

Will it be enough to get over the hump in the MEAC this year? Or at least earn Maynor a contract extension?

Once a top power in the MEAC, Hampton has been in a drought for a while. It has been more than a decade since Hampton last won a conference title, its biggest drought since it went 50 years without a title in the CIAA. Hampton was predicted to finish fifth in the MEAC behind Bethune-Cookman and South Carolina State in addition to A&T and NCCU, so apparently the rest of the coaches in the conference don’t think the program is ready for a move forward, but only time will tell.