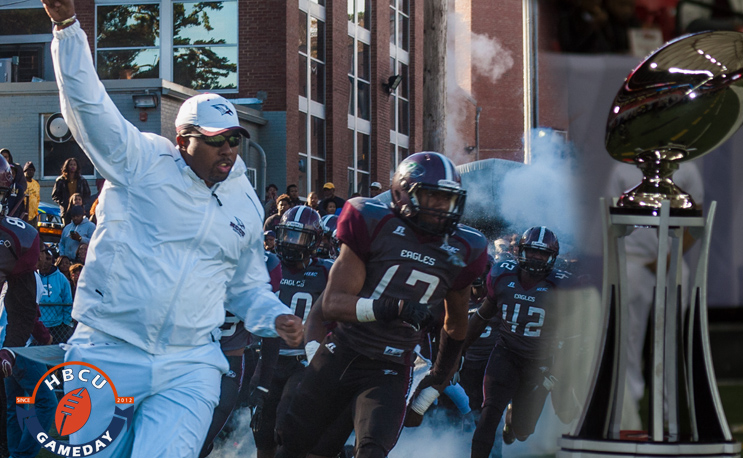 NCCU looking to stay on the MEAC mountain top as talent refreshes.

How does a team used to being the underdog deal with being the favorite?

If you are North Carolina Central, that is one of several daunting questions in front of you as you prepare for fall camp.

NCCU was appointed as the top team in MEAC football heading into the season at the Waterside Marriott in Norfolk, VA on Friday. It’s a position that is new to the program, despite winning three consecutive titles, including an outright title in 2016.

Head coach Jerry Mack said his team’s goals remain essentially the same as when he came to NCCU prior to the 2014 season.

“When we first walked into the building in 2014, the goal was to win a MEAC championship… the goal at that time was to qualify for the FCS playoffs,” Mack told Jay Walker at the coaches luncheon. “Our goal now is to win the MEAC Championship, go to the Celebration Bowl, and if we fall short, it won’t be for lack of trying.”

NCCU was one point away from achieving that in 2016, losing a 10-9 heartbreaker to SWAC Champ Grambling last December in the Georgia Dome.

Winning the MEAC title and winning the Celebration Bowl will have to be done without several of the key players Mack and his staff inherited from the previous coaching staff when they arrived in 2014. That group included current Tampa Bay Bucs defensive back Ryan Smith who helped win the first two titles along with quarterback Malcolm Bell, a veteran offensive line anchored by Carl Jones and defensive back Mike Jones who transferred to Temple following the 2016 season.

While Mack took the time out to recognize those players who helped build the foundation for his program, he was visibly excited about the players brought in under his watch who will take the spotlight in 2017 and beyond.

“We finally got a chance to recruit the type of athlete that we want to put on the field, and so we’re excited.”

That group includes running backs Ramone Simpson and Dorrell McClain as well as three former FBS players who transferred in over the summer to help on defense.

NCCU has gone 21-3 in the MEAC since Mack arrived in 2014, and haven’t lost to a conference opponent since Bethune-Cookman edged them out in their conference opener in 2015. Still, Mack knows there is a lot more to be done.

“I’m really proud of the guys who helped build this team in the beginning years, and obviously super proud of the guys that are here now because they started this journey with me,” Mack said. “But we’ve still got one more goal, and we’re not gonna back down on those goals.