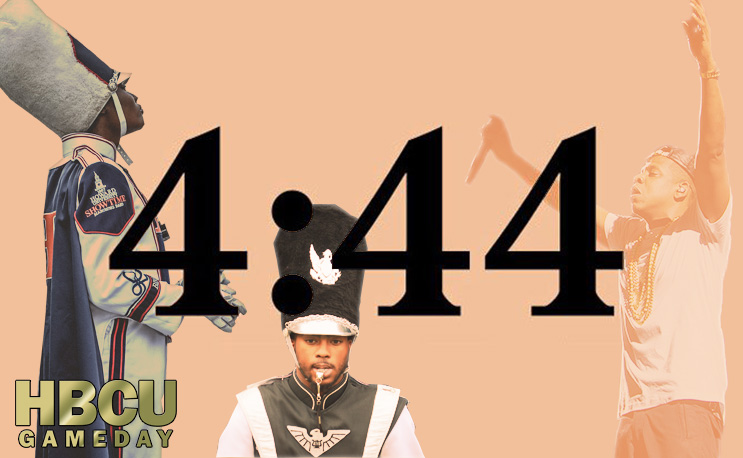 Jay-Z’s new album, 4:44, has given HBCU bands several gifts to chose from.

Jay-Z’s highly anticipated new album, 4:44, dropped last Thursday and the music world has been buzzing ever since. Widely regarded as one of, if not the greatest rapper of all-times, the 47-year-old has delivered what just might be the hottest album of the summer.

Of course, summer music anthems turn into fall anthems when HBCU bands get their hands on them. Released a little over a month before most band camps get going, you’re sure to hear your favorite band play at least one of these tracks come late-August/early-November.

Here are three tracks you are likely to hear played by HBCU bands.

As hard as it is to believe, it’s been 14 years since Jay-Z and Beyonce joined forces for “Crazy In Love,” the now legendary single from the former Destiny’s Child superstar’s debut album Dangerously In Love. Nearly a decade-and-a-half later, you can still hear those distinctive horns are still being played from Delaware to Oklahoma and pretty much anywhere in between.

The Carters have teamed up for another duet, albeit a less sun-shiny one in “Family Feud.” In the tune, Jay-Z basically confirms his infidelity which Beyonce reported in “Sorry” last year. Sonically, it has a rich track produced by NO ID and featuring samples from The Clark Sisters, Sister Nancy and Jacob Miller. This one needs a band with a big sound. (Here’s looking at you Human Jukebox and Marching Wildcats).

The Story of OJ

More NO I.D. Magic. This Nina Simone sample will be tough to replicate, but a versatile band like FAMU’s Marching 100 or Norfolk State’s Spartan Legion may be able to pull it off.

The album’s intro track is multi-layered and hard-hitting, both in lyrical content and composition. Many will try but few will likely be able to pull it off sharply.

Jay Z, King of the Summer Anthem, has given HBCU bands several gifts to chose from. But they must choose wisely or risk falling flat.