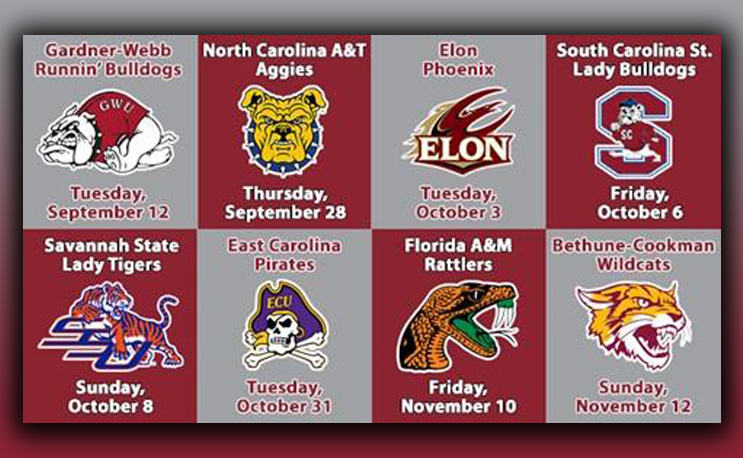 NCCU’s first nine contests will be played over the course of three weekend tournaments.

The Lady Eagles will make their home debut against Gardner-Webb on Tuesday, Sept. 12 in the first of eight matches scheduled to be contested inside McDougald-McLendon Arena.

NCCU will round out non-conference play with a home-and-away series against East Carolina University, playing in Greenville on Sept. 19 and at home on Halloween. The maroon and gray will also host Elon on Oct. 3.

Six of NCCU’s eight home matches are on weeknights and those half dozen showdowns will all begin at 6 p.m. Admission is free for all home contests.

The Lady Eagles will also embark on a four-match league road swing that will include three matches in four days against the Rattlers in Tallahassee, Florida, the Wildcats in Daytona Beach, Florida, and the Lady Tigers in Savannah, Georgia.

The 2017 MEAC Championship will return to the campus of University of Maryland Eastern Shore (MDES) in Princess Anne on the weekend of Friday–Sunday, Nov. 17–19. The top four teams from both the Northern and Southern Divisions will qualify for postseason play in the tourney quarterfinals.

For the most current volleyball schedule and news, fans are encouraged to visit the NCCU Athletics Official Website at NCCUEaglePride.com.