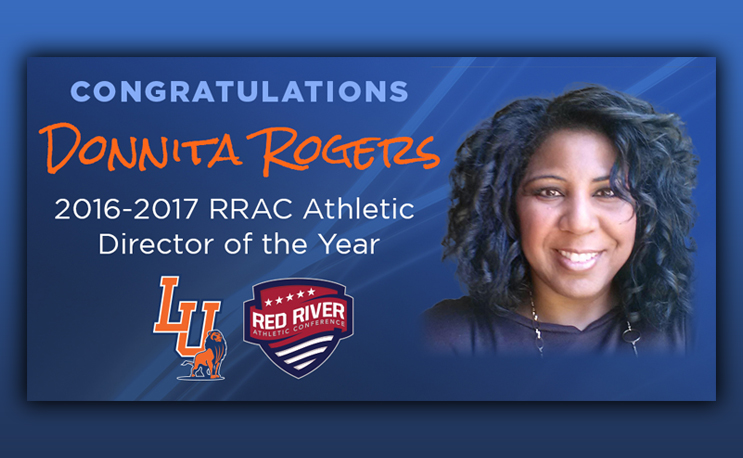 WACO, Texas – Langston University’s (Okla.) Donnita Drain-Rogers has earned the distinction of 2016-17 RRAC Athletic Director of the Year, two years after returning to the school to take the lead role with the Lions’ program. Rogers was the head women’s basketball for Langston from 2000-08 and, since her return in 2015, the department has reached new heights.

The RRAC AD of the Year award recognizes the athletic director who had the best year in overall program improvement, facility development, game administration, NAIA Champions of Character commitment, ability to hire and keep quality coaches, program growth in sports and revenue opportunities, contributions at the conference and national levels, and student-athlete development.

Rogers was previously recognized as the 2003 NAIA Region VI Athletic Director of the Year while at Northwestern Oklahoma State University. In the last year, she improved Langston’s promotional tools, created a new national event and has overseen a number of program honors such as the Lions first trip to the NAIA Division I Men’s Basketball Championship quarterfinals.

“Although I am not surprised, I am proud that our Director of Athletics, Donnita Drain-Rogers, was selected for this prestigious award by the RRAC,” says Langston President Dr. Kent J. Smith, Jr. Donnita exhibits daily the rare combination of having a remarkably high work ethic while maintaining exemplary character at all times”

“We are blessed and honored to have her at Langston University and we appreciate the RRAC for recognizing her value and effort.”

In the spring, Langston hosted the first ever National HBCU Softball Classic at ASA Hall of Fame Stadium in Oklahoma City. In addition to the Lions, seven visiting teams competed over two days including Grambling State University (La.) and Southern University (La.). Langston followed that with two upsets in the RRAC Softball Tournament to finish fourth in the event. The Lions placed third in RRAC men’s track & field and fourth in the women’s meet.

During the last year, Langston redesigned its athletics website to enhance its coverage and stepped up its efforts to provide news and content through social media.