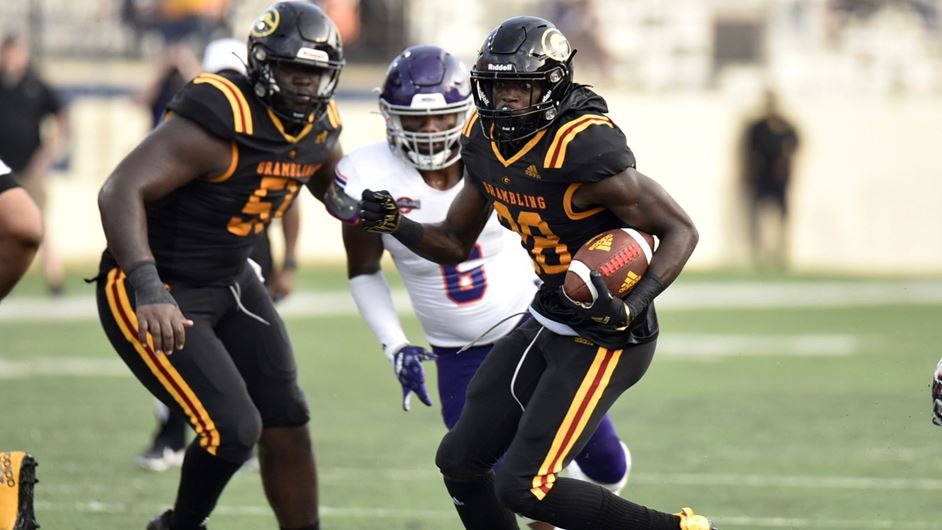 SHREVEPORT, La. | Quaterius Hawkins threw for 292 yards and three touchdowns in the first half and Maurice Washington provided the spark in the ground game as the Grambling State University football team gave head coach Hue Jackson his first collegiate coaching victory with a 47-21 win in the Shreveport Classic over Northwestern State on Saturday night at Independence Bowl Stadium.

Hawkins put on a showcase in the second quarter with touchdown passes of 83 yards, 20 yards and 71 yards. Washington did most of the damage in the first quarter by rushing 95 yards on five carries and touchdown runs of 61 and 25 yards

Grambling State’s opening drive stalled and was forced to punt the football.

Northwestern State (0-2) began its drive at its own 14 and marched 86 yards in 11 plays as Miles Fallin connected with Zach Patterson for a 13-yard touchdown strike as the Demons took an early 7-0 lead with 9:40 remaining in the opening quarter.

After another Tigers punt, NSU started its drive on the Demons 45. Fallin connected with Jaheim Walters for 30 yards and rushed 17 yards to the GSU 25. After a Grambling State penalty, Fallin was picked off in the end zone by Donald Lee, giving the Tigers new life.

The turnover paid dividends for Grambling State as Maurice Washington hurdled one NSU tackler and went 61 yards to the house as the Tigers cut the margin to 7-6 as Garrett Urban’s PAT was blocked with 5:33 remaining in the first quarter.

After the first three-and-out for Northwestern State, Grambling State started its drive on its own 45. The Tigers went 55 yards in 10 plays as Washington bolted for his second score of the day, a 25-yard touchdown. Quaterius Hawkins connected with Lyndon Rash on the two-point conversion as GSU grabbed a 14-7 advantage with 28 seconds left in the quarter.

On the very next NSU drive, Kevin Thomas picked off Fallin at the Demon 19-yard line and went 17 yards before being tackled out of bounds at the NSU 2. GSU cashed in the turnover on a Chance WIlliams 1-yard touchdown with 12:13 remaining in the second.

Grambling State (1-1) went back to work after another NSU punt at its 16. The Tigers made quick work as Rash caught an 83-yard touchdown pass from Hawkins as Grambling State extended the lead to 28-7 with 9:50 left.

The Tigers put the game away with 3:35 remaining in the first half as Hawkins tossed his second TD pass, a 20-yard strike to Claude Coleman as GSU pushed the lead to 34-7 as the PAT was blocked.

Grambling State forced Northwestern State to punt the football and the Tigers immediately took advantage as Hawkins found a streaking JR Waters down the left sideline for a 71-yard touchdown as GSU extended the lead to 41-7 with 1:37 left in the half.

Northwestern State capped a 10-play, 72-yard drive as Fallin connected with Scooter Adams for a touchdown to trim the GSU lead to 41-14 with 10:42 left in the third.

Grambling State answered as Fallin was stripped sacked by Bryan Powell and the ball was picked up by Joshua Reed, who took it to the house for the 63-yard score as the extra point was blocked, with the Tigers firmly ahead, 47-14, with 6:51 remaining.

The Demons added a 1-yard touchdown by Kolbe Burrell with 12:13 left in the final quarter to close the gap to 47-21.

UP NEXT
Grambling State makes the trip to Jackson, Mississippi next weekend as the Tigers visit Jackson State for a non-conference game. Kickoff against JSU is set for 1 p.m. from Mississippi Veterans Memorial Stadium and will be streamed live on ESPNU.