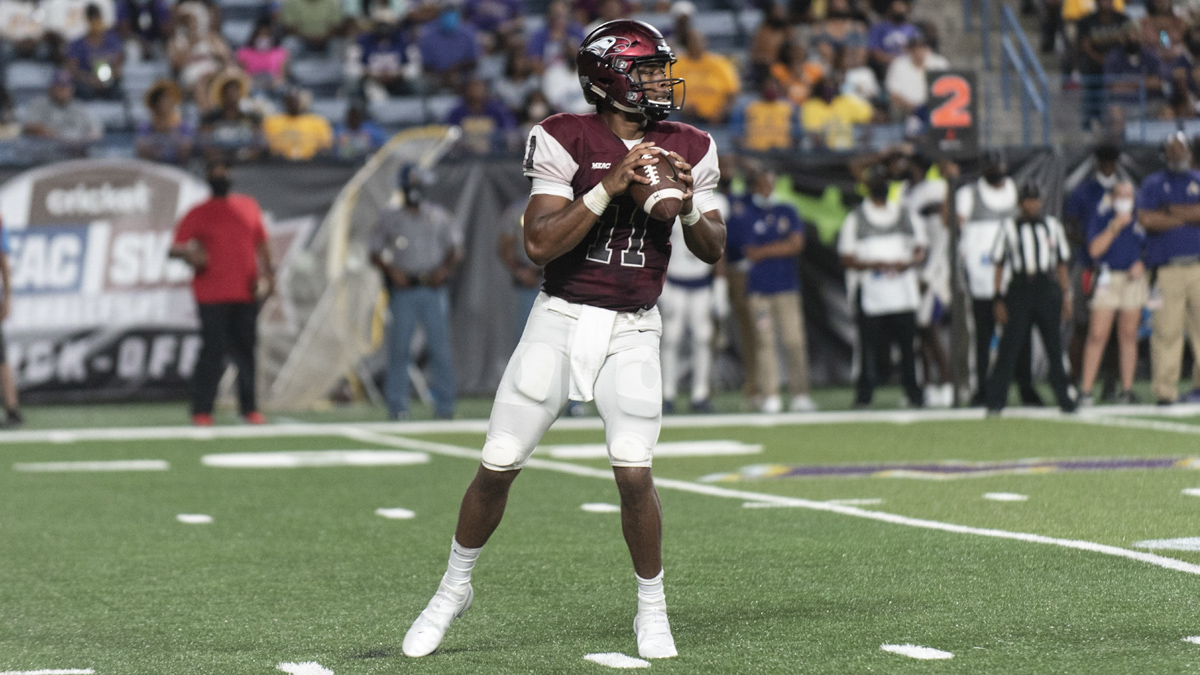 CHARLOTTE, N.C. — Davius Richard made his reputation in high school in Florida as a running quarterback. Against North Carolina A&T, he enhanced his resume as a passer and helped NC Central take victory in the storied HBCU rivalry.

Richard threw for 200 yards and two touchdowns, and rushed for 54 yards and two more scores to take the Eagles to a 28-13 victory in the Duke’s Mayo Classic on Saturday night.

Because of his play and that of his supporting cast, the Eagles converted 10 of 16 third-down plays and their lone fourth-down attempt. In addition, he collected 54 of NC Central’s 69 yards rushing.

“For real, I just want to have a winning game,” Richard says when asked if this was the type of game he wanted to turn in every week.

“No matter how we win, if I throw for 400 yards or if I throw for 12 yards, as long as we win, that’s the most important thing to me,” he says. “But I just want to commend the other 10 guys on offense that helped me get into the box two times and deliver two touchdown passes. I wouldn’t be able without them.”

NC Central Coach Trei Oliver noted that his team was healthier in 2022 than the last time he faced the Aggies. That helped, but Richard was the key ingredient, ultimately causing pain to the A&T defense.

“Like every week, so consistent,” Oliver says. “He handled pressure. They blitzed on almost every down, so he hung in there and delivered the ball. I can’t say enough about that young man.”

The pressure was consistent, and it was varied. In third-down situations, the Aggies had three down linemen at the line of scrimmage, with the linebackers about 10 yards behind them and the defensive backs maybe another 10 yards deeper. That appeared to challenge NC Central to throw the ball deep, so Richard took what he could get in shorter passes. Two passes in particular proved to be crucial in the third quarter.

Faced with a third-and-8 at their own 6, Richard connected on a short pass to Andrew Smith, who turned it into a 20-yard gain. Then, on a third-and-13 at the Eagles 23, Richard found Latrell Colliert for a gain of 15. NC Central didn’t score on that drive, but those two plays prevented North Carolina A&T from getting good field position after having pinned the Eagles deep.

“He’s just a very smart young man,” Oliver says. “He makes great decisions with the football. You know, we have some guys around him who make plays.”

North Carolina A&T coach Sam Washington acknowledged that Richard hurt his defense with efficiency and not necessarily with style.

“We knew he was very capable. This is his third year starting,” Washington said. “What he was doing wasn’t nothing heroic. But he was getting the ball to where he needed it to be. It wasn’t pretty, either, but it was effective.”