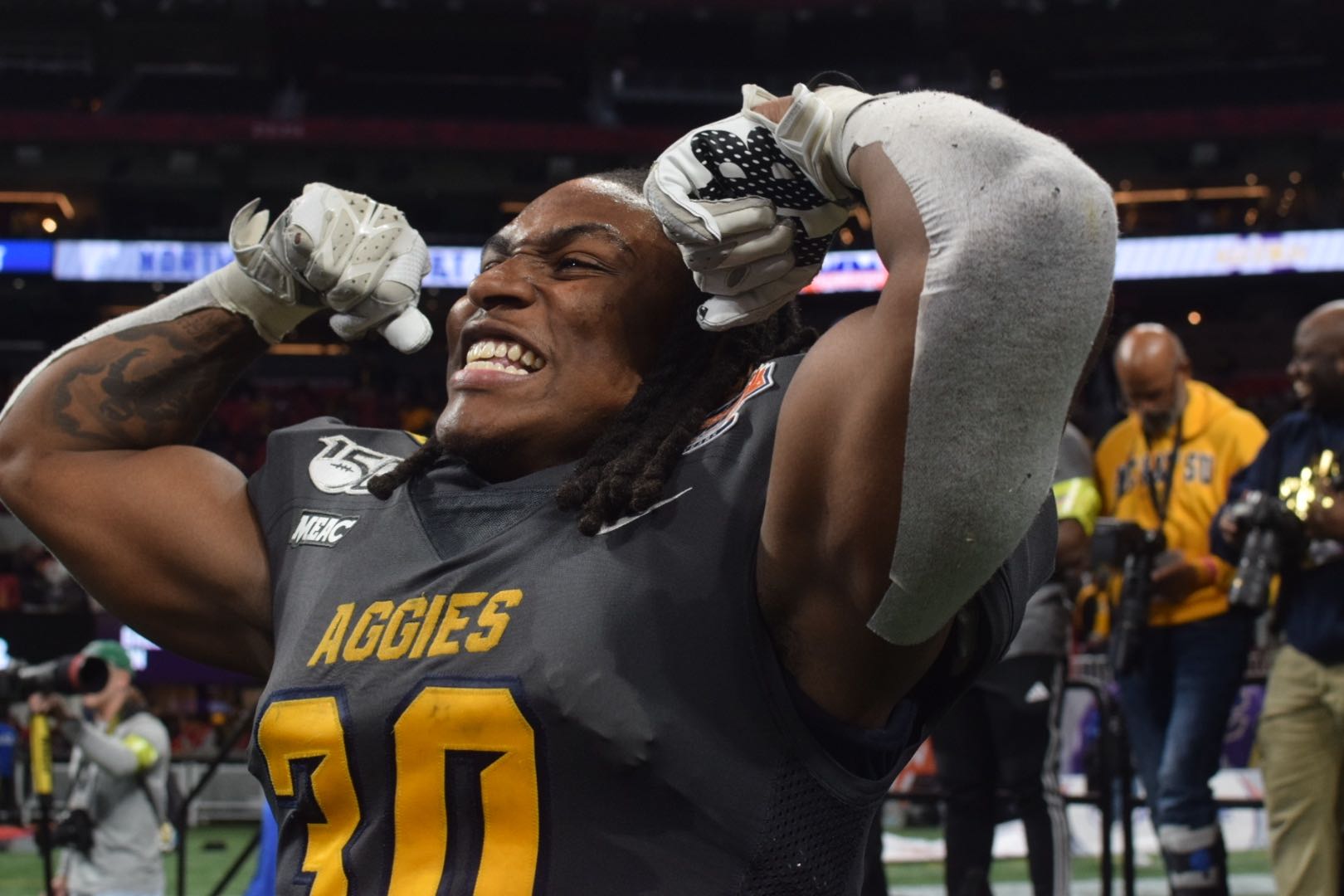 2019 Protect Your Skull National Players of the Year

For the first time ever the award honors DI and DII players separately.

ATLANTA–HBCU Gameday in conjunction with Protect Your Skull is happy to announce the 2019 Players of the Year for FCS and Division II Black College Football. The voting was conducted by a seven-member panel using a weighted scale system.

FCS Offensive Player of the Year

Jah-Maine Martin from North Carolina A&T is the FCS Offensive Player of the Year. The junior running back averaged 120.5 yards rushing per game, the only MEAC rusher to average more than 100 yards per game. Martin set a single-season record for rushing TDs at North Carolina A&T, finishing with 23 for the season. He helped lead the Aggies to a third-consecutive Celebration Bowl title in December with 110 rushing yards in a 64-44 victory over Alcorn State.

FCS Defensive Player of the Year

Rico Kennedy from Morgan State University is the FCS Defensive Player of the Year. The senior linebacker made an impact all over the field for the Bears in 2019. He was tied for first place in the MEAC with 16 tackles for a loss. Kennedy was also the third leading tackler in the conference with 105 total tackles. He also posted two interceptions and 4.5 sacks in his final season.

Ja’rome Johnson from Bowie State University is the Division II Offensive Player of the Year. The junior quarterback took the reigns from Amir Hall and led the Bulldogs to an undefeated regular season and another CIAA Championship. Johnson led Bowie State in rushing at 83 yards per game along with 155 passing yards per game. He rushed for 12 touchdowns while passing for 22 more. The Bulldogs lost to Carson-Newman, 17-9, in the first round of the NCAA Division II Playoffs.

One of the anchors on the defensive side of the ball for Bowie State was Joshua Pryor. He is the Division II Defensive Player of the Year. The redshirt sophomore defensive lineman provided a lot of bite for the Bulldogs with 13 sacks and 25 tackles for a loss in 2019. CIAA offenses will have two more years to try and avoid Pryor.

Congratulations from Protect Your Skull

Tracey Suggs and Foster Wilkins, cofounders of Protect Your Skull, LLC., issued this statement of congratulations for the 2019 winners.

“ On behalf of Protect Your Skull, LLC., HBCU Gameday, former winners, and the continued legacy of all the HBCU football greats of the past, we’d like to congratulate the 2019 National Offensive and Defensive Players of the Year from all Black College divisions for their incredible seasons. During this season you have all achieved great accomplishments on the field while playing the game safer and smarter. You have also demonstrated great leadership, character, discipline, work ethic, and integrity off the field in your respective communities. We wish each of you outstanding young men continued success in all your future endeavors. On your journey remember to reach back, give back, and always fall forward.”

2019 Protect Your Skull National Players of the Year