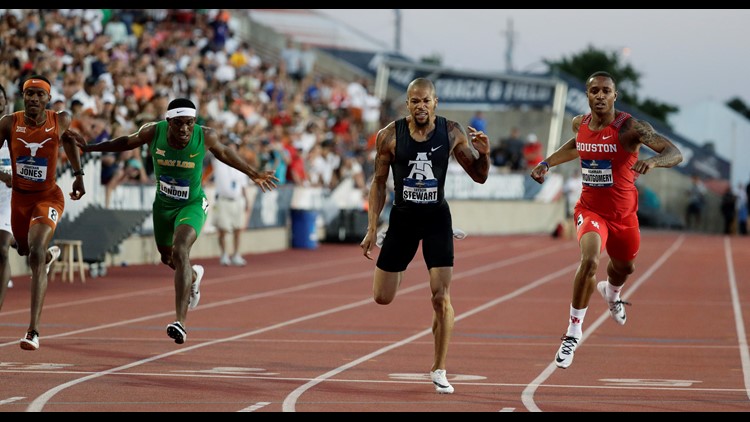 North Carolina A&T sprinter Trevor Stewart left it all on the track Friday night in Austin, Texas but it still wasn’t quite enough. But still, it was an effort to be proud of. Stewart was leading on the final straightaway but finished just two-hundredths of a second short of being crowned a national champion in the 400 meters.

Kahmari Montgomery from the University of Houston was a blink of the eye faster than Stewart in what might have been the race of the weekend at the NCAA Championships. A forward lean by Montgomery was the difference on a night when Stewart ran a personal best 44.25. Montgomery crossed the line at 44.23. Both times were the second and third fastest times in the world this year.

North Carolina A&T’s director of track and field programs Duane Ross was in awe of the race afterward.

“I thought he ran great,” said Ross. “The young man from Houston ran a very smart race and ran off of Trevor till the end. I’m proud of the way he competed. We wanted the win, but this is track and field and sometimes second happens.”

Trevor Stewart told the NCAA how proud he was of his performance and what it meant to put that work in at an HBCU.

“To be at an HBCU and to perform basically how I perform it’s a big deal,” Stewart said. “It’s not just for me but it is also for the HBCU community as well. I love my HBCU because when I got there, I felt like I was home again.

Stewart still has one more year of eligibility remaining. Which gives him another year to close the gap of two-hundredths of a second. One thing is for sure though, Stewart and his Aggie teammates have begun to close the gap on the rest of the NCAA.