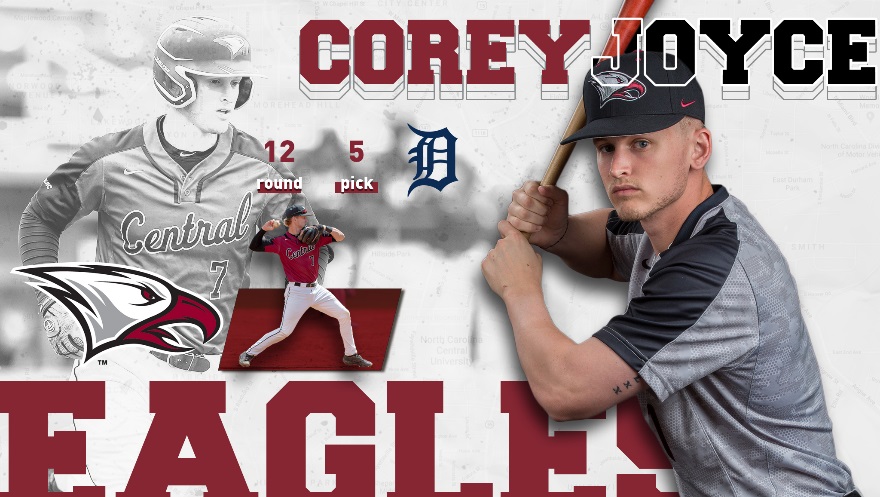 Back to back MEAC Player of the Year headed to Detroit

DETROIT – North Carolina Central University junior Corey Joyce (Lexington, N.C.) became the second Eagle selected in the Major League Baseball Draft in program history when he was selected by the Detroit Tigers in the 12th round on June 5.

Joyce follows former pitcher Andrew Vernon, who was drafted by the Milwaukee Brewers in the 28th round in 2017.

“I’m forever blessed to have this opportunity to be able to represent the only school that gave me a chance out of high school,” Joyce said.  “Thank you to all the people who have supported me along the way.”

Joyce had a tremendous career as an Eagle as he was named MEAC Rookie of the Year in 2017, as well as a Collegiate Baseball Freshman All-American.  He followed that with back-to-back MEAC Player of the Year campaigns in 2018 and 2019, and was the first Eagle to win the award, let alone garner it twice.

Joyce finished the 2019 campaign in the top-four of the MEAC in batting (.343), slugging (.527) and on base percentage (.444), and led the league in runs scored with 48.  He also finished tied for third in the conference with four triples and tied for fourth with five home runs, and drove in 32 RBI to be ranked in the top-10 in that category.  He also captured 12 stolen bases to finish second on the club.  Joyce set a new NCCU single-game record against Bethune-Cookman (March 15), when he became the first Eagle to register six hits, going 6-for-6 with a home run and four runs driven in.

Joyce started his career in a special manner as he delivered a walk-off double against Navy in the season-opener of the 2017 season as a freshman.  On that day in a doubleheader, he collected three hits with two home runs and a double, and turned in four RBI.

Joyce holds the highest career batting average in the modern era at NCCU at .348 over 138 career games played and started, and also sits atop the leaderboard in slugging percentage at .527.  He stands as the NCCU career leader in runs scored with 125, has the fourth-most hits with 187, and is tied for the third-most doubles with 34.  Joyce spent his career as someone to rely on in the middle of the order and registered 112 RBI to finish second in the career standings in that category, and also has the second-most total bases with 283.

“This is a very exciting time for Corey and our program,” NCCU baseball head coach Jim Koerner said.  “We are proud of all of his accomplishments.  The journey is just beginning for him.  It also goes to show what hard work and determination can do.”

The Detroit Tigers compete in the Central Division of the American League, and have four World Series titles.  They have also made five trips to the postseason and two World Series appearances within the last 13 seasons.  The Tigers’ Triple-A affiliate is the Toledo Mud Hens in the International League, and their Double-A affiliate is the Erie SeaWolves in the Eastern League.  Their farm system is completed with the Lakeland Flying Tigers of the Florida State League in Advanced-A ball, the West Michigan Whitecaps of the Midwest League at the Single-A level, and then the Connecticut Tigers in the New York-Penn League at the Short Season-A level.  They also have two Gulf Coast League teams at the Rookie level, as well as a Dominican Summer League team.