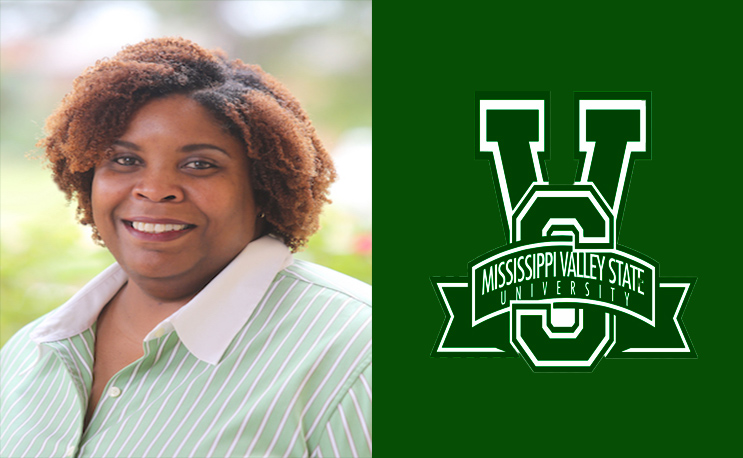 Mississippi Valley State just made school and SWAC history as it has chosen its first-ever woman marching band director.

Dr. Kerry Anne Simon of Memphis, Tenn. has been named MVSU’s new director of university bands following the retirement of Kenneth Milton. This announcement makes her the first woman band director not only in MVSU history, but also the SWAC—MVSU’s collegiate athletic conference.

Simon has served as the associate director of bands at MVSU since Aug. 2017. She will officially begin in her new role July 1, 2019.

“We’re excited to have Dr. Kerry Simon carry on and build upon the excellence of our University Bands program,” said Briggs. “As an alumna of MVSU, she has deep roots and an undeniable passion for The Valley. I am looking forward to seeing great things from her. Congratulations, Dr. Simon!”

Simon said she still hasn’t grasped the fact that she has made history.

“It hasn’t hit me yet,” she said. “This is a maIe-dominated field, for sure. I think we’re in the time now where people are paying more attention to women in the workplace.”

Simon said that throughout her career, she has realized that being a woman band director it a “big thing.”

“We had to take either band or choir. I’m a horrible singer, so they told me I should take band,” she chuckled.

“I am elated that I chose music,” she said. “In high school, I wanted to be a brain surgeon, but I’m so much happier with my choice.”

After high school, Simon attended MVSU, where she played in the “Mean Green Marching Machine” band under the direction of the legendary Leonard “Chief” Tramiel.

“Mr. Tramiel did not play any games. He gave me the discipline and that solid foundation needed to succeed,” she said. “My time at MVSU definitely prepared me to be a band director.”

Simon said her goal has never been to serve at an affluent music school.

“I knew I was a good teacher and my plight has always been to bring good, comprehensive music education programs at schools that wouldn’t normally get it.”

Simon brings a strong background in music education. After graduating from MVSU in 1995, she received a Master of Education degree from Union University in Jackson, Tenn.

“I thought I wanted to be a music administrator so that I could go into the schools and help band directors be great. But then I realized that I would never teach again—I would be sitting behind a desk for the rest on my life, and I was like ‘No,’” she said.

She decided to continue her education at Tennessee State University, where she received a Master of Music Education degree while working for Memphis City Schools.

In 2013, she earned a Ph.D. in Music Education from Florida State University and subsequently served at Coahoma Community College from 2014 to 2017 as the assistant director of bands before joining MVSU.

“To come home has been the icing on the cake,” said Simon. “I always knew I wanted to be a college band director, but to be able to come and give back to the university that helped me to be successful has been great.”

Her goals include taking the Mean Green Marching Machine to a new level.

“I would like for us to be a force to be reckoned with. I’m built with a mindset for greatness, and I want that for Valley and the band,” she said.

As for breaking ceilings, for Simon, it’s just a part of the job.