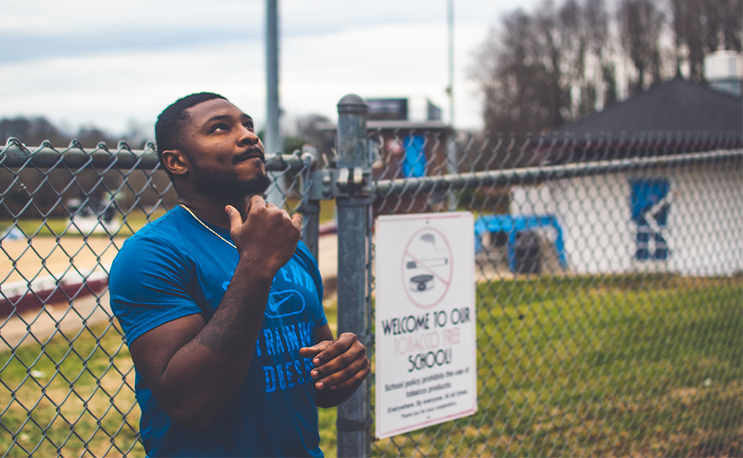 Pat Green didn’t get picked in the 2019 NFL Draft, but the Winston-Salem State linebacker is exploring options including the CFL.

Pat Green, like thousands of other pro football prospects, spent the last weekend glued to the television watching the NFL Draft. Like many of them he didn’t hear his name called, but a pro football team was trying to contact him.

“I really didn’t even know it until I looked at my email,” the former Winston-Salem State linebacker told HBCU Gameday. “Then I saw I had a missed call, so I was wondering if I missed something.”

The Ottawa Redblacks of the Canadian Football League have invited Green to work out for them in Atlanta on May 11th. He’s also receiving interest from other teams according to his agent. While the NFL is his ultimate goal, Green says he’s eager to perform for CFL scouts and continue his career.

“I feel like I can make plays in any league,” Green said on the phone Wednesday.

Green’s confidence has been forged through the fire, as he’s spent his college career battling ups-and-downs on and off the field.

A Winston-Salem native, Green started his college career at East Carolina after fielding several FBS offers as a two-way star at North Forsyth High School. Green’s three-season tenure at East Carolina was up-and-down. He admits it took a while to adjust to being a student-athlete in college, but eventually figured it out.

“It’s about the school using you, but that’s just a great opportunity for you to get your education if you are on scholarship.”

Green started the first few games of his third season before injuries slowed his progress. A desire to attend school and play football closer to home to be near his family brought him to Winston-Salem State in 2017. He started the season with high hopes of contributing as the team looked for a third straight CIAA title game. But in just his second game he suffered an ACL tear that ended his season and threatened to end his football career.

“I really started bawling because I was like, man this is gonna be my last game. Would I have to really sit out a year and not be play football until next year? But the coaches got together and told me to go back to ECU and graduate.”

And that’s what Green did, going to school while he rehabbed his knee without surgery. He credits his mother, Sonja Billips, for keeping his spirits up during a trying time.

Billips got to see her son get his degree in Human Development and Family Science at East Carolina last May. And she got to see him return to football in 2018 as he worked his way back on the field at WSSU, racking up 53 tackles and breaking up three passes on a defense that allowed just 20.8 points per game.

“I was really pulling for him,” former WSSU head coach Kienus Boulware said in March. “I was happy the NCAA did grant him that extra year since he played only a game before he had gotten hurt (in 2017).”

“For him to bounce back, I knew if he could stay healthy he had an opportunity to help us. He did just that,” Boulware said. “He went out there as a starter, it wasn’t given, it was earned.”

Green was excited to be back on the field, happy to be back at home and looking forward to pursuing his pro dreams. Then in December, tragedy struck as his mother passed away after a battle with cancer.

“I feel like she knew she was sick. And it was like because I was in school and my sister was in school, she didn’t want us to worry or stop doing anything to help her,” Green said. “My mama was a strong woman. She knew what was going on and she went out like she wanted to. She wanted to go away peacefully.”

The ever-resilant Green has spent the last six months preparing for a pro opportunity and the rest of his future. He won MVP honors at the HBCU Spirit of America Bowl despite playing in a new position just a month after his mother’s death. Since then he’s participated in a national combine and at the Wake Forest Pro Day where he ran in the 4.5-4.6 range.

But his mind isn’t just on football. He’s expecting a son, which means he’ll now have a family of his own to provide for. Green is hoping football will be a way to help him do that.

“Even though I have my degree, I want to play football professionally for a couple of years,” Green said, “and set myself up to be successful after I’m done.”