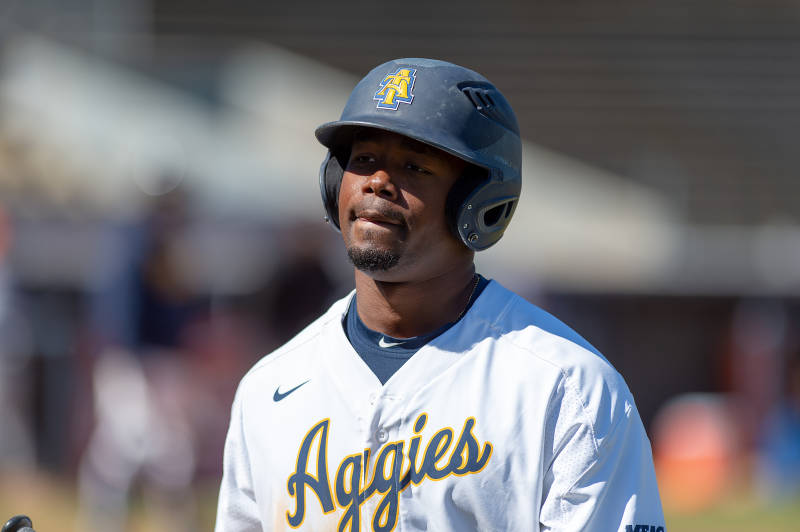 The Aggies are looking for a sweep against rival FAMU.

The game was stopped early because of the conference’s run rule. The Aggies scored at least one run in every inning except the seventh and at one point, the Aggies led 15-0 in the game.

Two five-run innings highlighted the Aggies dominance on the day. Leading 4-0 going into the fourth and with runners on second and third, junior Dustin Baber doubled down the left field line to score two more Aggie runs. Senior Jason King followed with an RBI single to give the Aggies a 7-0 advantage.

Senior Dawnoven Smith cleared the bases with a two-run home run to make it a 9-0 game. It was Smith’s second home run of the day and the 17th of his career.

N.C. A&T posted another five runs in the sixth inning. Juniors Zach McLean and Ryne Stanley singled to get the rally started. Senior pinch-hitter Brandon Melendez walked to load the bases. McLean scored as Justin Williams was hit with a 1-2 pitch to force in the run.

FAMU walked in another run to give the Aggies a 12-0 as Tony Mack trotted down to first to force home Stanley. N.C. A&T finally got a hit to get a run home as Baber earned an RBI single to score Melendez. King complemented Baber’s single with a two-run RBI single to score Mack and Williams for a 15-0 lead.

Gates pitched five scoreless innings for the Aggies to improve to 4-0 on the season. Josh Barr (1-3) took the loss.

N.C. A&T will go after the sweep on Sunday as the two teams will play Game 3 at noon.