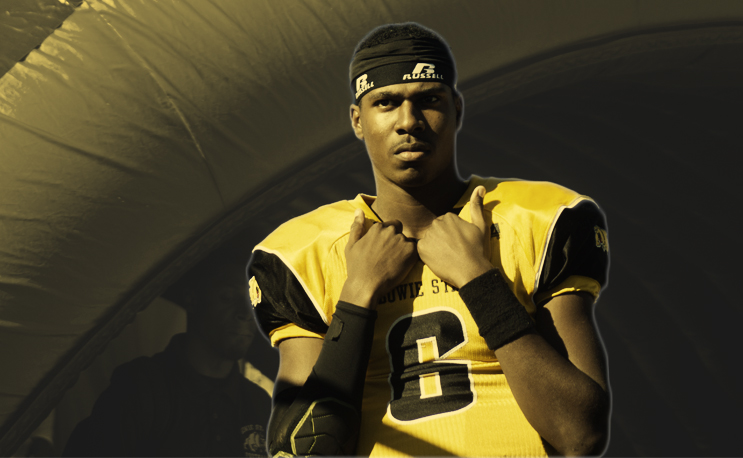 Amir Hall ran a time that would have had him in the the top five of the NFL Combine at his pro day.

Bowie, MD–Amir Hall’s quest to become the first quarterback from an HBCU selected in the NFL Draft since 2006 continued on Tuesday.

It was officially Bowie State’s Pro day, but all eyes were on its record-setting passer who spent the past three season re-writing school, conference and HBCU records. Five pro teams came out to the pro day, including the NFL’s Bengals and Baltimore Ravens, along with the AFL’s Washington Valor.

The 6’6 quarterback showed that he could move on Wednesday, running a 4.69 time in the 40-yard dash. That time would have tied him for time at the 2019 NFL Draft Combine. He showed he can jump as well, with a 32.5 vertical leap and a 10’4 broad jump. And of course, we all know he can throw the football.

Hall earned an invite to the NFLPA Collegiate Bowl following his senior but was only allowed to throw one pass by coach Mike Tice. He was skipped over by the NFL Combine last but did put together a solid showing at the NFL Regional Combine earlier this month.

Sources tell HBCU Gameday Hall will have an individual workout with the Tennessee Titans this weekend at Bowie State.

The Bowie native was the main draw but far from the only standout.

BSU receiver Lasana Sesay had a solid showing as well. He ran a 4.56 in the dash and registered a 9’9 in the broad jump.

Former Alabama State safety Kurron Ramsey showed up as well and put on a solid all-around performance. He ran the dash in a 4.49 with a 10’1 broad jump and an impressive 34.5 verticle jump.