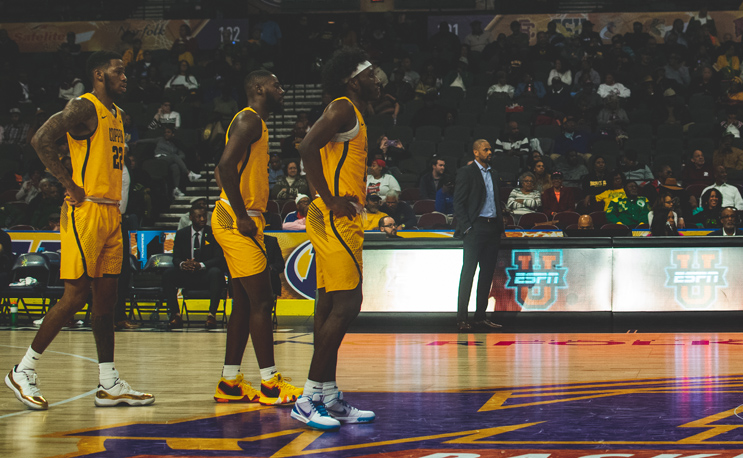 Coppin State’s season is over, but Juan Dixon and Co. believe the lessons learned will last for a long time.

It’s rare that a coach walks into the locker room after a heartbreaking defeat in a conference tournament and his optimisim feels ginuine and real. Coppin State’s Juan Dixon accomplished that feat late Wednesday night in Norfolk, Virginia.

“I’m just looking forward to next season already,” Dixon said. “I can’t wait to get started.”

Dixon’s Coppin State squad pushed second-seeded North Carolina A&T to overtime in the MEAC quarterfinals, ultimately coming out on the wrong end of an 82-79 score. His players were visibly crushed on the court, hands hitting the hardwood floor of the Scope or on the tops of their heads in anguish, all the usual emotions of a last-minute March loss.

But the former Maryland star and NBA guard seems to think he has something really special on his hands. And it starts with a fast-paced style and a playmaker in Dejuan Clayton that he thinks he can run with.

“We played a certain style our last three games of the season, and we had a lot of success. For 28 games we didn’t play the brand of basketball that we should have been playing to help these guys continue to get better every day. To help these guys see the game through a different lens.”

Dixon said things came together in Norfolk a few weeks earlier during a 72-38 loss to eventual regular season champion Norfolk State. The team scored just 12 points in the first half, and with nothing left to lose, Dixon loosened the reigns in the second half.

“I said guys, I want to play like the Houston Rockets. Shoot a ton of threes. If you open, let it go. Don’t hesitate. And I think the we hit like five 3s. Next practice, I said guys we’re just gonna play free. We’re gonna put the wall in Dejuan’s hands. Run pick-and-roll, let this guy (Lamar Monger) launch from anywhere on the floor.”

Coppin State averaged better than 80 points per game over its last three contests using its new style, including back-to-back wins over rival Morgan State in the regular season finale and MEAC first round.

Clayton had a stellar MEAC Tournament, scoring 23 points against Morgan State in Tuesday’s first round win and coming up with 16 points and a career-high nine assists in the loss to A&T. Clayton calmly drove the length of the court in the final seconds on Wednesday night and put up a potential game-winning three-pointer that just bounced off the back rim. So that confidence is growing, and its going in both ways.

“Our coaches put a lot of trust in us,” Clayton said. “They tell us every day in the locker room, when things get down, just stay together. Stick together. And that’s what we did.”

Something brewing in Baltimore

Dixon showed up at Coppin State with a big name and little else just over two years ago. He’d only been a head coach one season, and that was coaching D2 women’s basketball at UDC where he only won three games. His record wasn’t very impressive, the team finished 3-25, but his name carried enough to land him the D1 job in Baltimore coaching a Coppin State team that has fallen on hard times in the last decade-and-a-half.

He’s only won 13 games in his first two years, including an 8-25 record this year, but it looks like he has things trending in the right direction. More than that, though, he seems to relish helping young men thrive on and off the court.

“I tell our guys all the time, it’s bigger than Coppin State and the MEAC,” he said as his players agreed. “It’s about helping these guys prepare for life after college. Helping them fulfill their dreams. Helping them get an education. Helping them become better people, that’s what it’s about.”

Make no mistake about it, though, Dixon is in it to win it. He knows Coppin State has a history of basketball excellence, and he’s looking to add to that legacy.

“It’s gonna be a long offseason, but it’s gonna leave a bad taste in Dejuan’s mouth. He’s gonna lead. He’s our junior next year, we don’t have any seniors. And I’m gonna lean on this young man to lead us, to help us get to a place where Coppin State hasn’t been in a long time, and that’s to win the MEAC regular season and the tournament.”

The rest of the MEAC better watch out if he gets the financial tools to make it happen.