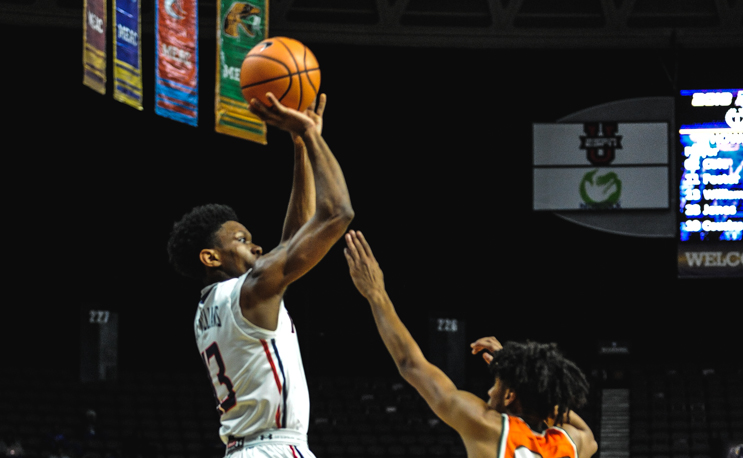 After three games against non-Division I competition, Howard finally played a school on its level and got a win. Can it keep it up?

Howard University won its first three games, all at home, and all convincingly. And nobody batted an eye. But that might be changing now.

HU picked up its fourth win of the season on Friday night, beating UMass 68-63 in the Las Vegas Invitational.

Charles “C.J.” Williams led the way for Howard, scoring 19 points in the win. The sophomore from Virginia hit 7-of-12 shots from the field and five 3-pointers. Sophomore R.J. Cole, the preseason MEAC Player of The Year, added 17 points and 7 assists.

HU came into the game with a 3-0 start, the best in nearly 40 years, and it was hot early. It hit 50 percent of its field goals (14 of 28) and 3-pointers (6 of 12) and took a 36-29 lead in halftime. Those numbers slumped in the second half, but it managed to still come away with a solid win.
The program is off to a hot start overall. It came into the game 3-0, it’s best start since the 1979-80 season. However, the competition didn’t inspire a lot of excitement. First there was NAIA member Washington Adventist. Then there was Central Penn of the United States Collegiate Athletic Association. Finally, Regent, a Division I member of the National Christian Collegiate Athletic Association (NCCAA).

So Friday’s game was its first against Division I competion. U-Mass came into the game 2-1 with wins over UMass Lowell and New Hampshire. Not a world beater, but a solid non-conference win for a program who didn’t get its first D1 non-conference win last year until late December.

Despite being located in a basketball Mecca, Howard basketball has failed to win the MEAC since the George H.W. Bush era. Coach Kevin Nickleberry has two the MEAC’s best scorers and players in Williams and Cole, and what appears to be an emerging supporting cast.