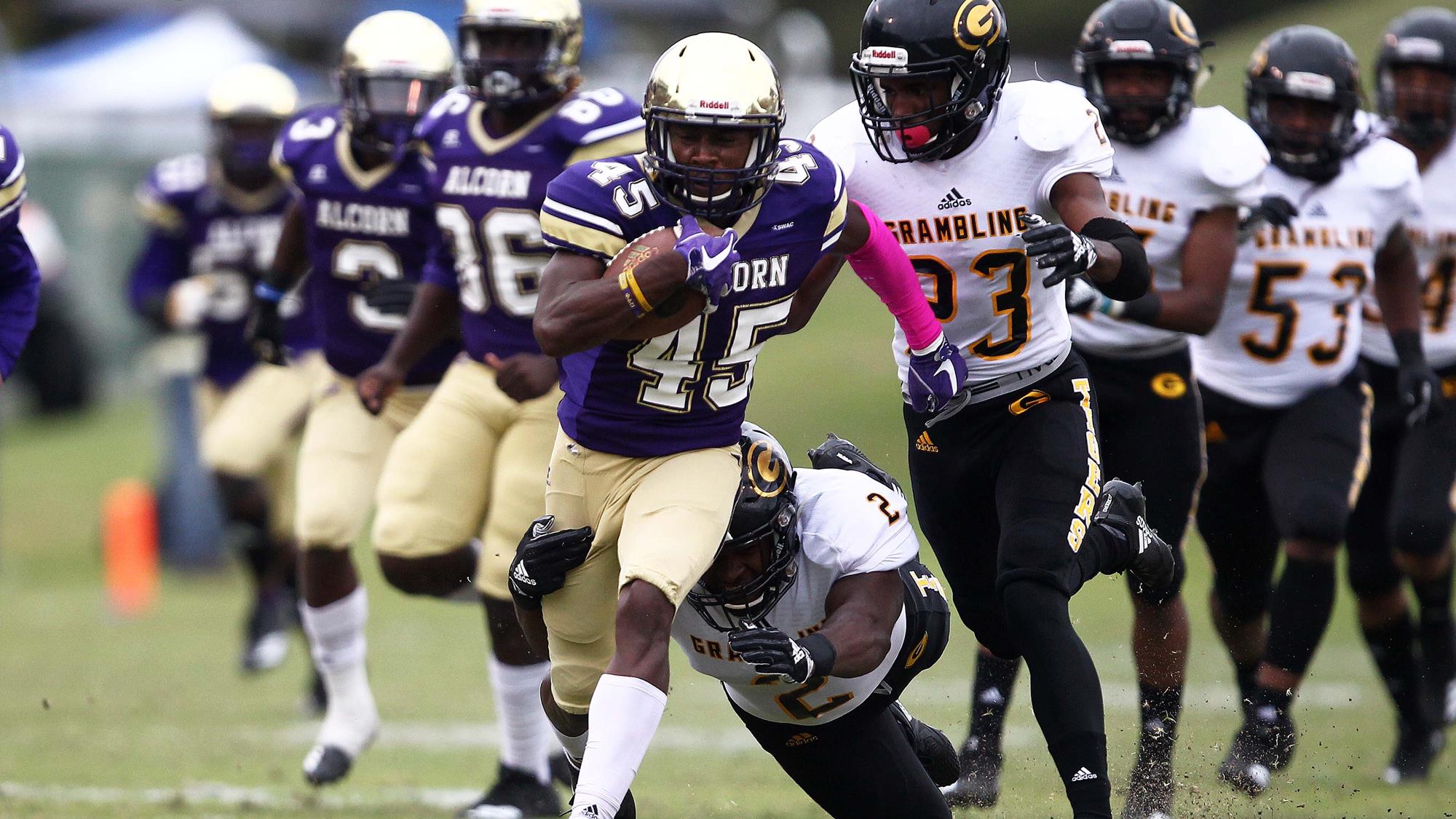 Alcorn vs Grambling lives up to the hype, Braves win

LORMAN, Miss. – A touchdown pass to junior Chris Blair with 12 seconds left was the decisive score in a 33-26 win for the Alcorn State University football program over Grambling State on Saturday at Jack Spinks-Marino Casem Stadium.

The score was tied 26-26 when the Braves (6-2, 4-1 SWAC) were faced with a 3rd-and-20 from the GSU 36 in the final minute. Rather than going short to set up a manageable field goal attempt, junior Noah Johnson aired it out and connected with senior Dayall Harris for 33 yards along the right sideline at the GSU 3. After a two-yard run by Johnson, the Braves called their final timeout with 17 ticks remaining.

On the game-winning play, Johnson rolled out to the right and drew defenders toward him when he found Blair wide-open in the end zone for the score.

It was the second touchdown catch of the game for Blair who caught five passes for 37 yards. Johnson ended with 160 passing yards, two touchdowns and 44 rushing yards in the back-and-forth battle over the Tigers (3-4, 2-2 SWAC).

Alcorn outrushed GSU 148-84 in the game as junior De’Shawn Waller ran for 74 yards and a touchdown.

Junior Terry Whittington had a heroic day defensively with career-highs of 15 tackles, 6.0 tackles, 4.5 sacks, and a forced fumble. Sophomore Qwynnterrio Cole also turned in a career-high with 11 tackles to go along with 1.5 tackles for a loss. Junior Solomon Muhammad reached double-figures with 10 sacks.

Geremy Hickbottom led the Tigers in both rushing and passing. He threw for 279 yards and rushed for 54 and a touchdown. Hickbottom would have had over 100 rushing yards if it weren’t for the sacks. Danquarian Fields wrapped-up 10 tackles defensively.

GSU had the ball first and marched right down the field to take an early 7-0 lead. It was an 11-play, 75-yard drive capped by a three-yard touchdown run by Johntavious Robinson.

It was looking like it could get ugly for the Braves in the first quarter after the Tigers continued to move the ball with ease. However, a couple of big stops in the red zone resulted in only field goals as GSU led 13-0 at the 3:18 mark.

The spark that got the Braves going was a big 60-yard kick return by junior Javen Morrison to the GSU 30. After a facemask on the Tigers, Alcorn got on the board with a 12-yard touchdown run by Waller to cut the deficit to 13-7 at the 2:20 mark.

The Braves continued to move the ball early in the second. A 14-yard pass to Blair, followed by an 18-yard run by Johnson setup Alcorn at the GSU 25. A couple of runs by senior P.J. Simmons got the Braves close, but they ended up kicking a 26-yard field goal by McCullough to trail just 13-10 at the 12:34 mark.

On the following possession, GSU was backed up by a pair of penalties when junior Darrell Henderson stripped Hickbottom on a scramble attempt and junior Theron Bonds dove on it at the GSU 9. Alcorn cashed in on a nine-yard touchdown pass to Blair to take the lead. The Braves went up 16-13 with 12:06 to go after a missed extra point.

Alcorn’s huge second quarter continued after a pick-six by Morrison. Hickbottom was under pressure when he underthrew a receiver and Morrison returned it 34 yards to give the Braves a 23-13 edge. The score remained the same at the half.

Alcorn had the ball first in the third quarter and was threatening on its opening drive after reaching the GSU 17. Though, the Braves were backed up by a holding penalty, and on 3rd-and-23 GSU came up with an interception by Kenan Fontenot which was returned 33 yards to the Alcorn 48.

GSU took advantage of the turnover and chipped away with a deep 52-yard field goal by Marc Orozco to make it a 23-16 game midway through the third.

Late in the quarter, the Tigers tied it on a 24-yard keeper by Hickbottom. He ran right through the center and then made an acrobatic dive at the goal line as he flipped in the air and stuck the ball across for the score.

The seesaw battle continued in the fourth as the dependable GSU kicker Orozco nailed a 40-yarder to put the Tigers back ahead 26-23 with 12:03 left in the game. It ended a long drive that was highlighted by a 45-yard rush by Hickbottom.

Alcorn responded with a 14-play drive of its own which included 14 and 10-yard rushes by Johnson. The Braves were setup at the GSU 29 when the drive stalled out and McCullough came in and drilled a 40-yarder to even the score at 26 with 6:41 left.

Both teams had a couple chances late, but a big penalty on the Tigers for fair-catch interference gave the Braves great field position at the GSU 26 with 1:42 remaining. Though, already in field goal position, Alcorn returned the favor with a 15-yard chop block to make it 3rd-and-20 at the GSU 36. That’s when Johnson found Harris to set up the game-winner to Blair.

GSU had one last play with six seconds left at the GSU 44, but a short pass to Robinson only went for 19 yards as Cole made an open-field tackle to end the game.

The Braves will be back on the road next weekend when they head to Prairie View A&M for a 2 p.m. kick-off. The Braves are 41-15 all-time against the Panthers.

Alcorn vs Grambling lives up to the hype, Braves win