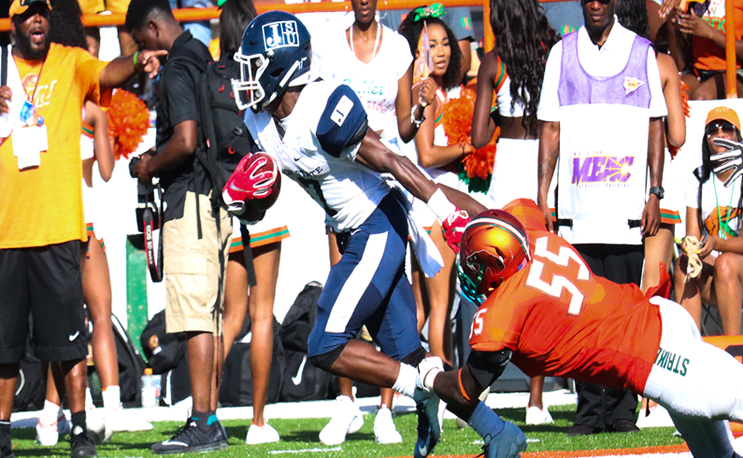 Jackson State came away with another heart-stopping win over FAMU on Saturday. Here are things to know.

Four years after having to deal with “the Hail Mary,” Florida A&M found a new heartbreaking way to lose to Jackson State.

Jackson State edged its rival from the MEAC 18-16, but the way that FAMU lost will sting for a while.

Trailing by two points with less than a minute to go, Ryan Stanley hit Marcus Williams on a deep pass that he nearly took all the way in to the endzone, but was controversially ruled out at the the 2 yard line. What ensued will haunt FAMU fans until they play and beat Jackson State again.

Here are three takeaways from the game.

FAMU Situational management on the last drive was a disaster

FAMU took over trailing by two with no timeouts at the 37 yard line with 1:09 remaining in the game. Ryan Stanley went to work and completed two passes to start the drive but for some reason FAMU called two straight halfback draws with no timeouts remaining. With 34 seconds left, Ryan Stanley connected with Chad Hunter who got the ball all the way down to the 3-yard line. With 16 seconds remaining on the clock FAMU ran another draw play with no timeouts remaining and was stopped for a 1-yard gain and time ran out before FAMUs kicking team could get on the field.FAMU’s mismanagement of the clock in the closing seconds was baffling, and gut turning for the Rattler faithful.

The JSU defense was opportunistic

The Tiger defense played bend but don’t break most of the evening allowing 463 total yards but they were able to force three Rattler turnovers to keep the Tigers in the ball game. FAMU quarterback Ryan Stanley threw for 340 yards and a touchdown but it was three fumbles and 15 penalties for 177 yards that kept the Rattlers in neutral.

Despite lack of touchdowns, JSU showed it can move the ball

Jackson State left Tallahassee with only their 10 th win since the start of the 2015 season. The win for The Tigers wasn’t a pretty one but it was definitely what the program needed.Jackson State’s air raid offense led by sophomore Derrick Ponder started off slow but ponder was able to get in rhythm late in the first half and was able to finish the day going 25 of 41 for 270 yards and a touchdown. Ponder did have one interception but he able to limit the mistakes the plagued both he and the offense in game one. Running back Jordan Johnson provided a spark for Jackson State with 93 yards rushing and he added 24 yards receiving for the Tigers. It was an encouraging sign for a program that needs to get folks excited once again.