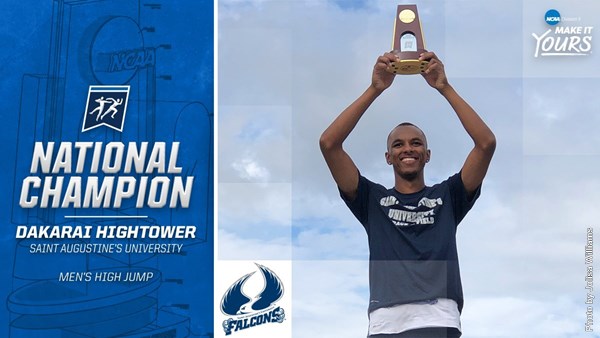 The trophy race is underway for SAU at the NCAA DII Championships.

His victory was one of several top moments for the Falcons and Lady Falcons on the Johnson C. Smith University campus. Magaly Tshipopo (Jr./Orleans, France) earned All-America honors in the women’s high jump and triple jump, and the women’s 4×400-meter relay squad captured the second heat to qualify for finals. Brandon Valentine-Parris (Jr./St. Vincent) reached the men’s 200 meter finals and later led the Falcons to the 4×400 relay finals.

Hightower set the tone earlier in the day. Ranked third in the regular season, Hightower made five of six jumps to outlast Myles Pringle of Ashland University. The Falcons’ senior cleared 7-1¾ on his second try while Pringle missed all three attempts at the same height.

The winning leap was a season-best for Hightower, who became the fourth different Falcon in school history to win the men’s outdoor high jump crown. The Falcons claimed their first men’s title in the event since 2009.

With 10 points from Hightower, the Falcons climbed back in the men’s team standings. They are tied for ninth heading into Saturday, the final day of the championship meet. Ashland is the second-day leader with 24 points followed by Tiffin University with 17.

The SAU men are prepared to make a championship run as well. Valentine-Parris advanced to Saturday’s 200 finals one day after reaching the 400 finals. His time of 21.10 was seventh-fastest in the 200 prelims. Najair Jackson (So./Spanish Town, Jamaica/Javelin) and Justin Williams (So./Brooklyn, NY/Triple Jump) will also be in action on the men’s side.

Both Valentine-Parris and Kalawan will compete in four events Saturday. Valentine-Parris will sprint in the 4×100 relay in addition to the 200 and 400 dashes and 4×400 relay. The 4×100 team includes Damere Gilbert (So./Sharon Hill, PA), Adrian Kimmons (Sr./Cold Water, MS) and Dontarian Evans (Jr./Gainesville, FL). The 4×400 squad, which posted the fifth-fastest time (3:09.70) in Friday’s preliminaries, includes Evans, Kimmons and Shaquille Dill (Jr./Pembroke, Bermuda).