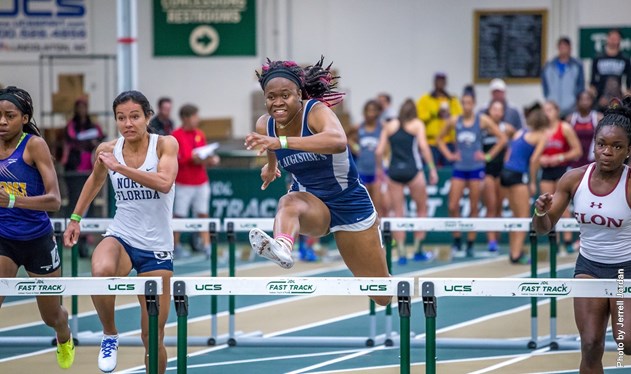 The Barbados native starred in track, volleyball and in the classroom during her time at St. Aug.

RALEIGH, N.C. (May 16) – Multi-talented standout Shakera Hall (Bridgetown, Barbados) of Saint Augustine’s University was named the 2018 CIAA Female Scholar-Athlete of the Year at the conference’s End-Of-Year Awards Reception in Charlotte, N.C., on Tuesday, May 15.

“This is overwhelming,” Hall said. “I would like to thank Coach [George] Williams for helping me become a well-rounded individual at Saint Augustine’s University.”

A ferocious outside hitter, Hall led the CIAA and ranked fourth nationally in Division II in kills per set (5.04). She also ranked seventh in DII in points per set (5.43).

In track and field, Hall played a key role in helping the nationally-ranked Lady Falcons sweep the CIAA indoor and outdoor titles. She is the CIAA 60-meter hurdles indoor champion and 100-meter hurdles outdoor champion. Hall has captured four individual conference crowns in her stellar career including the Pentathlon in 2017 and 2015.

The SAU graduate found time in her busy schedule to help others. She was among a group of CIAA students who volunteered with the Samaritan’s Feet organization during the league’s basketball tournament in Charlotte, N.C. She washed children’s feet and gave them new socks and shoes.

Hall is the second SAU Scholar-Athlete winner in two years. In 2017, track and field standout Shawn Rowe was the CIAA men’s recipient of the honor.

To be eligible for the award, a student-athlete must have at least a 3.2 GPA, superior athletic achievement, community service and spent one year at the institution. Student-athletes were nominated by the conference’s sports information directors and voted on by the league’s athletic directors, senior woman administrators, faculty athletic representatives and sports information directors.