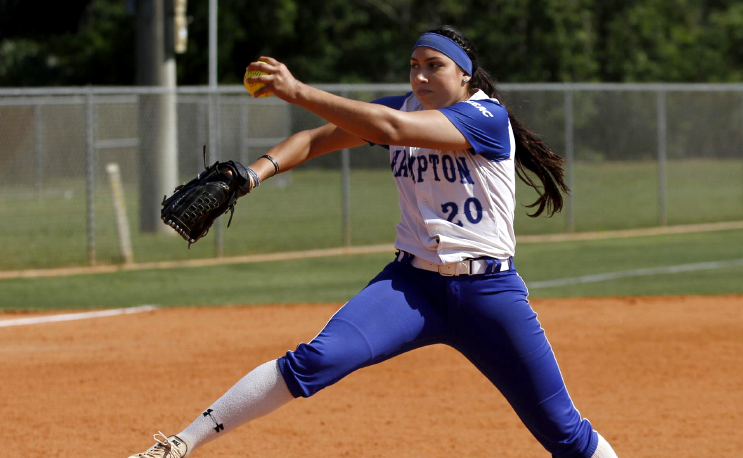 Longest game in a quarter of a century.

ORMOND BEACH, Fla. – Twenty innings of softball later on a warm Thursday in the 2018 Mid-Eastern Athletic Conference Tournament, Hampton advances in the elimination bracket with a pair of wins.

In the longest game in the last 25 years for Hampton, a one-out single by Sarah Kollas plated Cassidy Blackwell with the winning run as Hampton took a 4-3 win in 13 innings over Coppin State.

The nightcap saw Allie Hotetz throw a complete game as Hampton scored two in the fifth and one in the seventh to eliminate Morgan State 5-3.

The Lady Eagles, who are seeded fourth from the Southern Division, improved to 19-25 overall. The 19 wins are a new NCAA Division I school record.

NCCU will next play No. 2 North seeded Hampton University in another elimination game on Friday at 3 p.m. If they win that game, they will play another game 30 minutes after that contest for a chance to play in the Championship game(s) on Saturday.

Freshman third baseman Hera Varmah belted a leadoff solo homer in the top of the seventh to vault the Florida A&M Women’s Softball team past Morgan (Md.) State, 2-1, in the second round of the 2018 Mid-Eastern Athletic Conference Softball Championship at the Ormond Beach Sports Complex.

FAMU (22-27) advances to Friday’s 12 Noon winner’s Bracket final, where they will duel archrival Bethune-Cookman, a 3-2 winner over Savannah State, for a trip to Saturday’s championship round.

The hunt continues TODAY at 3PM against the Lady Tigers of Savannah State. #PreyTogether #HuntingSeason pic.twitter.com/LCn31sT1tn

The Wildcats (29-24) will face – who else? — arch-rival Florida A&M Friday at noon for a berth in the finals. If they lose, they’ll return at 5 p.m. to play either Hampton or North Carolina Central for the other berth in Saturday’s final, needing two games to win.