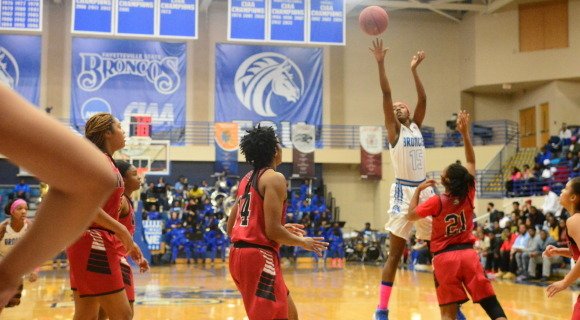 The Broncos have now won ten (10) straight games. The last loss for FSU was on January 8th against Bowie State. With an 8-0 Southern Division record, Fayetteville State (9-5 in the CIAA) has a two-game lead over second-ranked Winston-Salem State, who dropped to 6-2 in the division and 7-7 in the conference.

The fourth quarter was an electrifying back and forth affair that had the arena on their feet. The period itself featured four (4) lead changes and three (3) tied scores.

With 2:28 left in the game, Bracey made her first of two free throws to tie the game at 55 for the fifth overall time. Her second gave the Broncos its final lead of the game. Courtney Best hit a jumper in the paint for a three-point lead (58-55) with 1:21 left.

Down by three (59-56) with 13 seconds left, WSSU called a timeout to advance the ball. Kandace Tate, who hit a game-high 22 points, scored a layup with three seconds left to move the Rams within one-point (59-58) of the Broncos.

A pair of free throws by Jones would seal the game, despite the three-point attempt by WSSU’s Teara Johnson that missed as time expired. Johnson finished the game with 16 points. She was 2-of-4 from beyond the arc.

The active hands and opportunistic style by the Broncos proved to be the difference in the game. Fayetteville State had 13 points off 19 Rams’ turnovers.