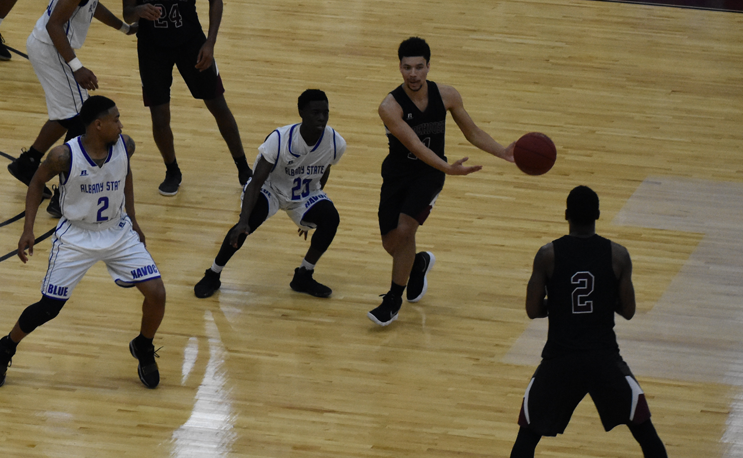 ATLANTA–After a tight first half, the Morehouse’s offense took form and dominated in the second half of the game, defeating Albany State, 76-63, Saturday evening at Forbes Arena.

The Tigers finished with three players in double figures. Tyrius Walker, who came in averaging nearly 24 points per game, led the team in scoring with 22, followed by Jordan Wallace with 12 and Michael Olmert with 11.

Leading 35-34 to begin the second half, the Tigers found an offensive rhythm and their shots began to fall. Walker, the SIAC’s leading scorer, nailed back-to-back jumpers to score four of his 16 second-half points to give Morehouse a 39-34 lead.

Following a pair of free throws by Olmert, the Rams finally got on the board with a layup from Donall Tuff. Walker responded for the Tigers, hitting another three-pointer to put Morehouse 44-36. The teams went back and forth adding free throws before the Tigers went on a run that would lead them to victory.

With a 46-40 lead, solid defense around the basket and a 17-6 run, Morehouse changed the scope of the game, giving the Tigers a 65-48 lead. Wallace, Keith Heard, James Walker, Olmert, and Walker scored baskets. The Rams fought back, hitting two three-pointers and a dunk by Tuff to bring the deficit within nine.

Morehouse, however, was too much down the stretch. Walker drained another clutch three-pointer and scored seven of the Tigers final 11 points – four points coming from free throws — to seal the victory.

Morehouse shot 43 percent off 27-of-63 shooting from the floor. Unlike the first half where they shot 1-of-7 from three-point range (14 percent), the Tigers finished 5-of-13 (38 percent) from beyond the arc in the second half.

Rams cool off in second half

Morehouse jumped out to an early 8-4 lead to begin the game before the Rams began their solid first half of shooting, hitting shots on a consistent basis to trail 12-11 with 11:43 to play in the first half.

Following the timeout, the two teams exchanged baskets before the Rams took the lead, one that they maintained up until the final few possessions of the half.

Tied at 32 with 1:21 to play in the half, Aaron Washington added two free throws for the Rams. With seconds remaining, Wallace hit a three-pointer to give the Tigers a 35-34 lead at halftime.