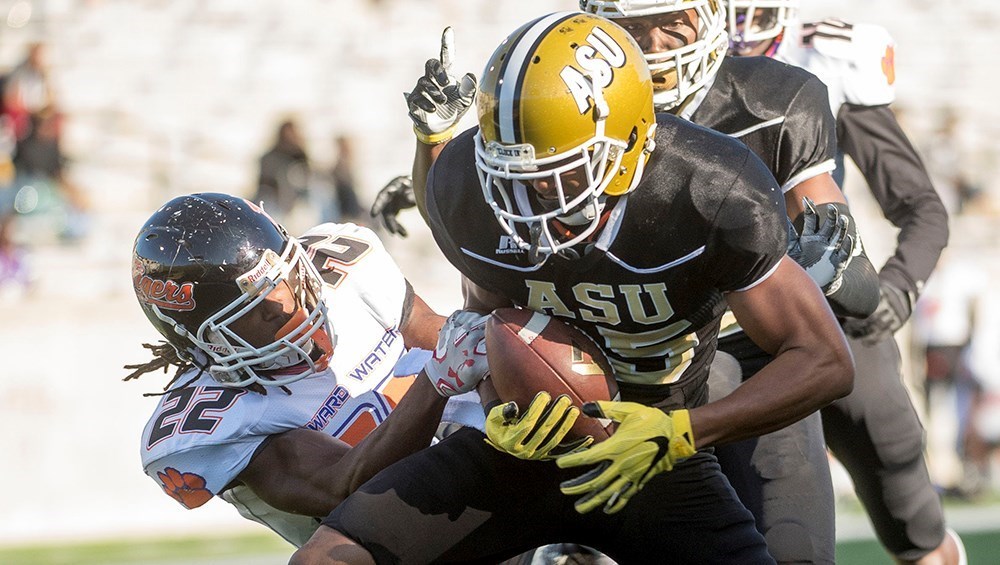 MONTGOMERY, Ala. – After a day full of festivities surrounding the 94th annual Turkey Day Classic and a slow start, Alabama State was able to pull away in the second half and close the season with a convincing 37-3 victory over Edward Waters Thursday afternoon at ASU Stadium.

“I think in the first half we played down to their level,” Alabama State interim head coach Donald Hill-Eley said. “It’s kind of hard getting guys to play when they see what is across from them. In the second half, we brought energy and wanted to give the offensive line carries and things they probably have never done in their lives. I know a lot of people wanted us to go for touchdowns but we didn’t want to damage the other team’s spirits and teach our young men character.”

Alabama State (5-6) jumped on top early in the contest with 10 first quarter points, highlighted by a 15-yard pass from Kobie Jones to Joe Williams IV with 3:03 to play in the opening quarter. The Hornets got on the board a possession before that with a 25-yard field goal from Hunter Hanson.

Edward Waters was able to add a field goal with 10:33 to play in the half to trim the halftime deficit to 10-3.

Hornets pull away after halftime

The Hornets were able to take control of the game in the second half, scoring a pair of touchdowns. Ezra Gray scored from four yards out with 9:24 to play to extend the lead to 17-3, before George Golden ran it in from 20 yards out for a 24-3 lead with 3:16 to play in the third quarter.

Alabama State used a pair of fourth-quarter field goals from Hanson (26 and 45 yards), and a three-yard run from Robert Pritchett III for the final margin.