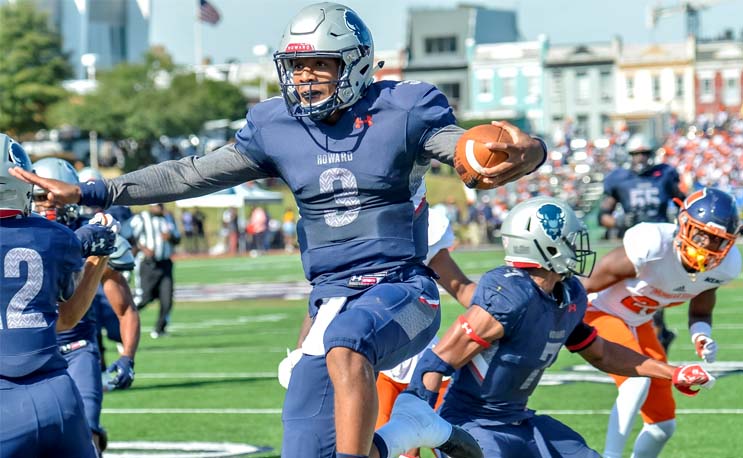 Bison move above .500 with win over Morgan.

WASHINGTON (October 21, 2017) – After last week’s big road win at Delaware State, Coach Mike London and the Howard University Football team had another impressive performance with a 39-14 win over the Morgan State (MSU) Bears on HU Homecoming.

HU (3-1 MEAC) racked up 387 total offense, including 157 yards on the ground. Freshman quarterback Caylin Newton spearheaded the Bison attack with his arm and legs. The Atlanta native had a career-high four total touchdowns, two passing and two rushing, in the victory.

Singer @EstelleDarlings did the coin toss at the 2015 #HowardHomecoming Football Game! Will You Be at the Game? #MissionPossible #HowardUNow pic.twitter.com/M0VknijOUt

Newton, reigning Mid-Eastern Athletic Conference (MEAC) Offensive & Rookie of the Week, put the Bison ahead after one, thanks to a 19-yard run down the left sideline for a 7-0 score.

Morgan State responded with a seven-play, 78-yard drive, capped off by a 15-yard run from Eric Harrell, to make it 7-7.

Next possession, HU reclaimed the lead after a 58-yard touchdown pass from Newton to deep-threat sophomore Jequez Ezzard, 14-7.

In HU’s first possession after intermission, Newton connected with Anthony for a quick slant, which turned into a 75-yard touchdown pass, 24-7.

Late into the third, Howard recovered a muffed punt from MSU and capitalized with a 1-yard TD from Newton, followed by a successful two-point conversation, 32-7.

With less than three minutes remaining, freshman Aaron Walker returned a 26-yard fumble for a touchdown, 39-7.