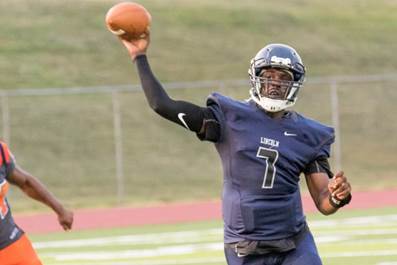 JEFFERSON CITY, Mo. – It was a seven-point game early in the third quarter, but a strong second-half performance helped Truman State beat the Lincoln football team, 41-14, on Saturday afternoon.

The difference in the game was the turnovers, as Truman State (1-3, 1-1 GLVC) took advantage of two interceptions, one of which was returned for a touchdown, and a pair of Lincoln (1-3, 0-2 GLVC) fumbles. The Bulldogs built a 21-0 lead in the first quarter and scored 20 second-half points to secure the win.

The momentum shifted Lincoln’s way in the second quarter, as a big tackle by Miles Drummond to stop Truman State on a fake punt sparked a Blue Tiger rally. Eugene Sainterling threw for 51 yards on the drive after that turnover on downs, including hitting Blake Tibbs on a 10-yard touchdown pass for Lincoln’s first score of the afternoon. Tibbs also made a big 16-yard catch on the drive, while A’Jani Johnson made a nine-yard reception and Franklyn Richardson and Harold Lacy each made eight-yard grabs.

The Blue Tigers forced a pair of punts on Truman State’s other two possessions of the second quarter, sending the contest into halftime with 21-7 showing on the scoreboard. Lincoln then started the second half strong, with a 14-yard run by Kimbo Ferguson cutting the Bulldog lead to seven. Johnson made catches of 18 and 22 yards on the drive while Terry Hunter made a big 18-yard reception.

Truman State answered quickly, marching down the field in two plays to regain a two-score lead. On the ensuing extra point try, however, Lincoln made its fifth block of the season, as Willard Cotton knocked down the ball as it was leaving the kicker’s leg. The Blue Tigers went on a 10-play drive after that, but the Bulldogs managed to stop the momentum with their second interception of the afternoon.

Sainterling completed 27 passes for 198 yards and the score, with Johnson accounting for 12 receptions, just one shy of the program single-game record. Johnson led Lincoln’s receiving corps with 89 yards, while Tibbs was next with 41. Hunter tallied 68 total yards on two receptions and five carries, and Ferguson finished with 28 yards while Lacy was next with 24.

Cotton led the Blue Tiger defense with nine tackles, including two for a loss, while Tui Huston, Aaron Brown and Edwin Durassaint each had five apiece. Amani Nelson had two quarterback hurries and made four takedowns while Marvin Holley had three tackles and broke up a pass. Jeff Jones and Phillip Kind each made tackles for losses.

Lincoln will be off next week before traveling to Albany, Ga. on Oct. 7 to take on Albany State in a 1:00 p.m. CDT contest.