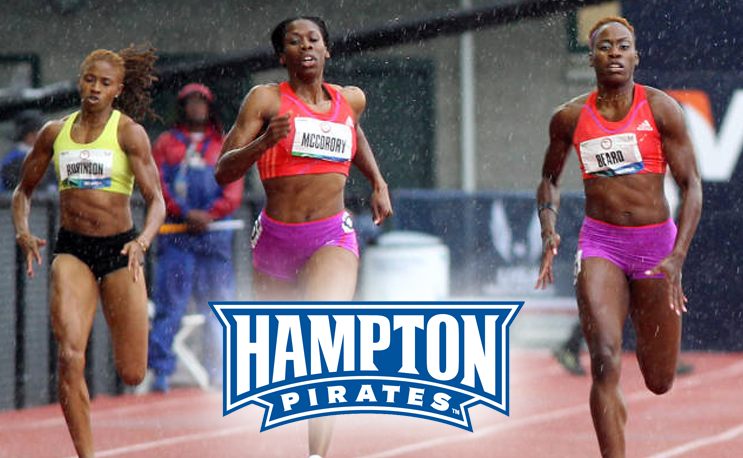 While a Lady Pirate, McCorory won two indoor 400 meter NCAA titles and one outdoor.  Her 2010 NCAA indoor performance set a new collegiate and American record at 50.54.  She also is a two-time Olympic gold medal winner as a part of the 4×400 relay teams in 2012 and 2016.

Women’s Basketball senior Malia Tate-DeFreitas was recognized as the Hampton University Athlete of the Year.  The recent graduate finished her basketball career as the second-leading scorer in school history, and Hampton’s NCAA Division I scoring leader, with 2,214 points.  She became the school’s Division I all-time leading scorer as she scored 16 points at N.C. State and passed the 2,000-point mark two games later against St. Peter’s.  Tate-DeFreitas was a two-time MEAC Player of the Year and MEAC Rookie of the Year as a freshman.

Dr. Walter Lovett was recognized as a Sports Person Emeritus Award winner.  A former football coach and athletic director at then Hampton Institute, Dr. Lovett coached the football team from 1974-1980 as his teams had a pair of seven win seasons that were the most for a Hampton football team in nearly 20 years at that time.

Yvette Lewis earned a Special Achievement Award recognizing her prolific track and field career from her high school days at Denbigh and Menchville, to Hampton University and representing the United States and Panama internationally.   While at Hampton she won two NCAA triple jump titles and earned six NCAA All-American honors.

For more information on Hampton University athletics, please contact the Office of Sports Information at 757-727-5757 or visit the official Pirates website at http://www.hamptonpirates.com.