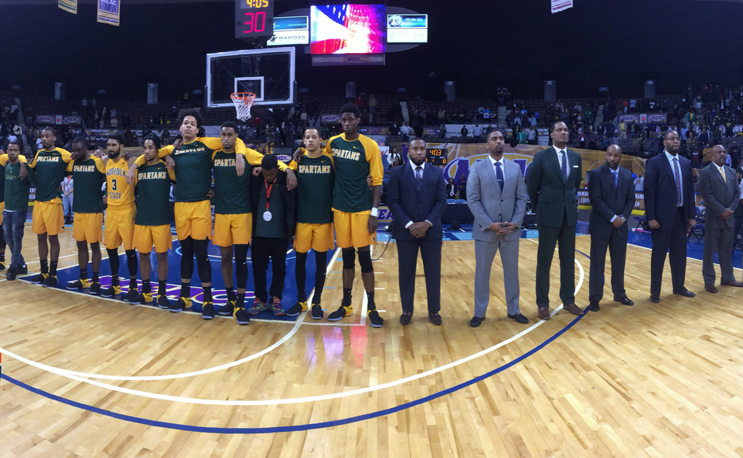 Norfolk State will have six newcomers after adding three players to its 2017 class.

Forward Tre’ Maloney and combo guards Nic Thomas and C.J. Kelly all signed NLIs to join the Spartans for the 2017-18 season. Maloney will arrive at NSU from Georgia Highlands College, while Thomas competed last season for Howard College in Texas. Kelly hails from Queens High School of Teaching in New York. All three will have at least three years of eligibility to spend with the Spartans.

“We are very excited about the five gentlemen altogether we signed for our 2017 class (including two November signees) and the sixth, Steven Whitley, who sat out last year,” Jones said. “This class should be a solid addition and fill some missing pieces to enhance next year’s team and beyond.”

At 6-7 and 220 pounds, Maloney will add size to the forward position for the Spartans. He averaged 5.2 points and 3.7 rebounds for Georgia Highlands in 2016-17 while shooting nearly 52 percent from the floor. Maloney can also step out and hit an occasional 3-pointer, knocking down 10-of-32 this year from three-point range.

“Tre brings a ton of energy and versatility to our program,” Jones said. “One of things we wanted to identify with this class was what we call ‘winning experience.’ Tre comes from a Georgia Highlands program that was 32-2, ranked in the top 3 in the country at one point and made the (NJCAA) national tournament. With three years of eligibility, we think the future is very bright for him.”

A 6-2, 185-pound guard, Thomas averaged 13.8 points per game last year for Howard College. He was named to the All-Western Junior College Athletic Conference (WJCAC) Team after leading the Hawks to a 20-12 overall record and the NJCAA Region 5 Tournament. He shot 44 percent from the field, including 36 percent (56-of-155) from beyond the arc. Thomas was a clutch free throw shooter at 83 percent while also averaging 3.4 rebounds and 1.0 assists per game.

He originally signed with Houston Baptist and received a medical redshirt in 2015-16 after missing most of the season due to injury. Thomas was a HomeSchool All-American as a senior for the Home School Athletic Association (HSAA), averaging 26.9 points, 5.0 rebounds, 3.6 assists and 1.7 steals per game. Like Maloney, Thomas will also have three years of eligibility remaining.

“Nic brings a high skill set to our program,” Jones said. “He is able to play multiple guard positions, which helps our versatility as well. He is a very capable 3-point shooter and a solid ball handler. After having a lot of success in one of the toughest JUCO leagues in the country in Texas, we expect that experience to pay dividends for the program for the next three years.”

A 6-5, 185-pound guard, Kelly averaged 28 points per game as a senior and ranked as the leading scorer in the New York City Public Schools Athletic League (PSAL) AA Division, the highest classification in the state. He also averaged 9.7 rebounds and 5.1 assists per game and earned third-team AA All-State honors from the New York State Sportswriters Association (NYSSWA). He led Queens Teaching to a 23-6 record and the Queens AA regular season title.

He scored 39 points with 11 rebounds and seven assists in a game earlier in the season and also set the school’s single-season scoring record. He earned first-team All-Queens honors from the TimesLedger. Queens Teaching was ranked as high as No. 4 in the tri-state area, and Kelly stood as high as the No. 5 ranked player in NYC, both according to Rivals site NYCHoops.net.

As a junior, Kelly hit a buzzer-beater to send Queens Teaching to a victory over the No. 19-ranked school in the nation, Cardozo High School. He led Queens Teaching to a 23-7 overall record that year while earning honorable mention all-state accolades. Kelly held offers from several mid-majors schools in and around the New York area before signing with NSU.

“C.J. is an explosive scorer and is another player who brings winning tradition,” added Jones. “For our diehard fans, he will remind them of NSU great Pendarvis Williams. At 6-5, he can play the wing and the point guard positions, and he can really shoot the ball. It was definitely a hard fought recruiting battle to win his services. But it was well worth it, as C.J.’s ceiling is very high.”

The Spartans went 12-4 last season for the third year in a row and finished in second place in the MEAC for the third straight time. Norfolk State posted an overall 17-17 record, its sixth straight season at .500 or better.