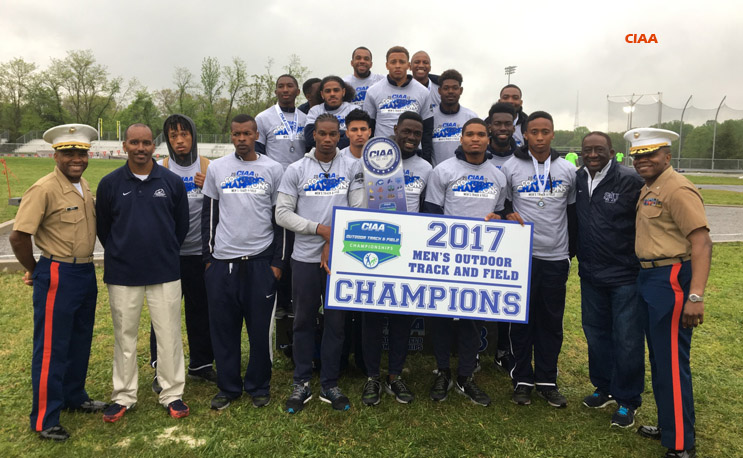 HBCUs, including powerhouse St. Aug, hold their own in NCAA D2 regional awards.

The U.S. Track & Field and Cross Country Coaches Association (USTFCCCA) announced their regional awards on Tuesday and it’s no surprise that the list included the Saint Augustine’s program. Before we acknowledge the obvious, SAU was not the only HBCU program to be recognized by USTFCCCA.

Briana Frazier, a junior from Benedict College, was named Track Athlete of the Year for the South Region.  Frazier is ranked in the top-10 nationally in both the 200 and 400.  Her top time this season in the 400 is a 54.37 which ranks her 6th nationally.  In the 200 she is 8th nationally with a top time of 23.74 this year.  She will compete in four events at the NCAA nationals later this week, the only female athlete who can lay claim to that feat this season.

Now on to the Falcons.  The powerhouse from Raleigh, North Carolina collected the Men’s and Women’s Track Athlete of the year in the Atlantic Region along with Head Coach and Assistant Coach of the Year honors.

George Williams has been captain of the ship for 41 years now and this year his Falcons dominated as usual. The 2017 resume includes a CIAA Championship, a 5th place national ranking overall and a number one national ranking in the 800 meters, 400 hurdles and 4×400 relay.

For nearly two decades Williams has depended on Assistant Coach of the Year, Sandy Chapman, who coaches sprints, hurdles, jumps and middle distance runners.  In the Atlantic Region, athletes under his guidance are ranked 1st in 8 total events.

Saint Augustine’s senior Shawn Rowe cruised to Athlete of the Year in the region with his NCAA DII best 400 meter hurdle time of 49.36.  Rowe ran that personal best time at the Penn Relays this year.  He’s also 11th in the nation in the 110 hurdles as well as a valuable member of the 4×400 and 4×100 relay teams.

Tia-Adana Belle rounds out the Falcon sweep in the Atlantic region as the female Track Athlete of the Year. Belle is a senior from St. George, Bahamas and she is number one in the nation in the 400 hurdles.  Her time of 56.26 is the 5th fastest time in NCAA DII history, which she ran at the Penn Relays as well.  She also runs on the 4×400 and 4×100 team while touting the number eleven ranking in the 110 hurdles at 14.20.

The NCAA DII Outdoor Nationals will kick off on March 25th and run through the 27th.  Saint Augustine’s will be looking for their fifth straight outdoor title and will be joined by seven other HBCUs on the men’s side and six for the women at the championships in Bradenton, Florida.