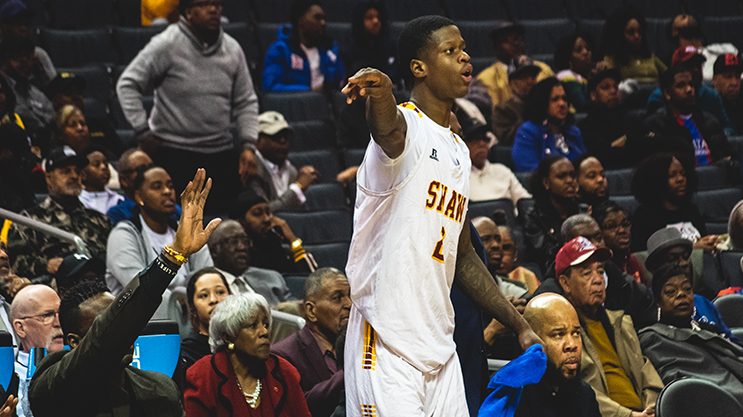 HBCU players were still getting picked in the NBA Draft in the 1980s, but as the draft got slimmer, so did their draft chances.

The 2015 NBA Draft is over, and for the fifteen time in the last 20 NBA Drafts, no players from a historically black college were among the 60 players selected.

That’s a far cry from the ’60s and ’70s, where HBCU players were routinely picked early in the draft.

The 1980s were a time of extraordinary change in the NBA. Magic Johnson’s Lakers and Larry Bird’s Celtics brought the league into primetime. Isiah Thomas’ Bad Boys provided drama and the emergence of Michael Jordan, Charles Barkley and a host of other stars began to usher the NBA into its modern era.

But change wasn’t so good for everyone. Especially black colleges.

By the mid-1980s, all major college powers had several black players–even deep south schools like Georgia and Georgia Tech, which was a far cry from the the previous two decades. Since Winston-Salem State’s Earl Monroe went second overall in the 1967 NBA Draft, black colleges had a much tougher fight on their hands for players that previously had no choice but to them.

For awhile, things weren’t that bad. Despite playing at Division II and NAIA levels, HBCUs continued to come up with top five talent, as players like Elmore Smith, Marvin Webster and Purvis Short were all selected early in their respective drafts. Short was part of a 1978 NBA Draft class in which six HBCU alumni were selected in the top 60 picks of the 10 round NBA Draft. (It should also be noted that Short was picked ahead of Larry Bird in the draft.)

That 1978 class would be the high point of the NBA Draft for black colleges. In fact, the 1980 and 1987 classes have been the only ones to have more than one player from an HBCU drafted in the first 60 picks.

While most mainstream publications were patting PWIs on their backs for making progress, niche publications like Jet Magazine and the Baltimore Afro-American monitored the downward trend for HBCUs.

Virginia Union’s Charles Oakley was one of the few HBCU players that broke through to become a first round pick in the NBA Draft, when the Cavs selected him ninth overall in 1985. He was one of just three black college players to accomplish that feat in the decade, joining Tennessee State’s Monti Davis and Alabama State’s Kevin Loder.

“The excitement grows as the draft gets closer,” Charles Oakley told Jet in 1986. “While most of the news is tough for Black college players who are usually drafted lower than they might deserve, there can be some surprises.”

Those success stories were becoming fewer and further between by the mid-1980s. While the former D2 superstar managed to break through, talented players on Division I teams struggled to get looks.

Texas Southern’s Harry “Machine Gun” Kelly is a prime example. The Jackson, Mississippi native lived up to his name at TSU, becoming the first player in NCAA history to score 3,000 points and grab 1,000 rebounds. Yet the 6’7 swingman wasn’t selected until the fourth round of the 1983 draft. He would be cut from the Hawks in favor of Randy Whitman.

“All eight of our schools are Division I and I would urge the NBA to take a closer look at them,” SWAC Commissioner James Frank told Jet in 1984. “They play on a comparable level to any major White institution.”

The frustration would continue and grow, as black college stars like Clark College’s Ernest Lee and Norfolk State’s Ralph Talley were drafted woefully low or went unselected at all.

Many of the best HBCU alums from the 1990s–like Southern’s Avery Johnson, Tennessee State’s Anthony Mason and Fayetteville State’s Darrell Armstrong–had to earn their way as undrafted free agents. The 1990s did yield two lottery picks in Jackson State’s Lindsey Hunter and Tennessee State’s Carlos Rogers, but those two remain the last two HBCU players selected in the first round, and that was 21 years ago.

So why are small colleges, specifically HBCUs, having such a hard time getting pro-level players? Besides the obvious–black colleges no longer get the best players and the explosion of the Euro Game–there is another reason according to a 2012 post on Sheridan Hoops.

“The elevated cachet of Division I, due to boosted financial dividends and exponentially increased media attention, have at the same time downgraded the appeal of the lower divisions and National Association of Intercollegiate Athletics,” Evin Demirel wrote. “More high school and summer league coaches believe the only route to the pros is Division I, and they pass those convictions to their players – who have grown up watching only D1 games on TV.”

There are plenty of reasons why HBCU players have struggled to get drafted, but for those who are invested in HBCU basketball, hope remains.

“I think it’s going to improve,” Ben Jobe told The Baltimore Afro-American in 1993. “We’ve had pro scouts at every game we’ve had so far, as high as nine at one time, I’m assuming that things, eventually, are going to get better.”

Shaw’s Amir Hinton is the best hope we’ve had in a while. The selection of a player from not only an HBCU, but a Division II HBCU in 2019, would be huge. We’ll see on Thursday.