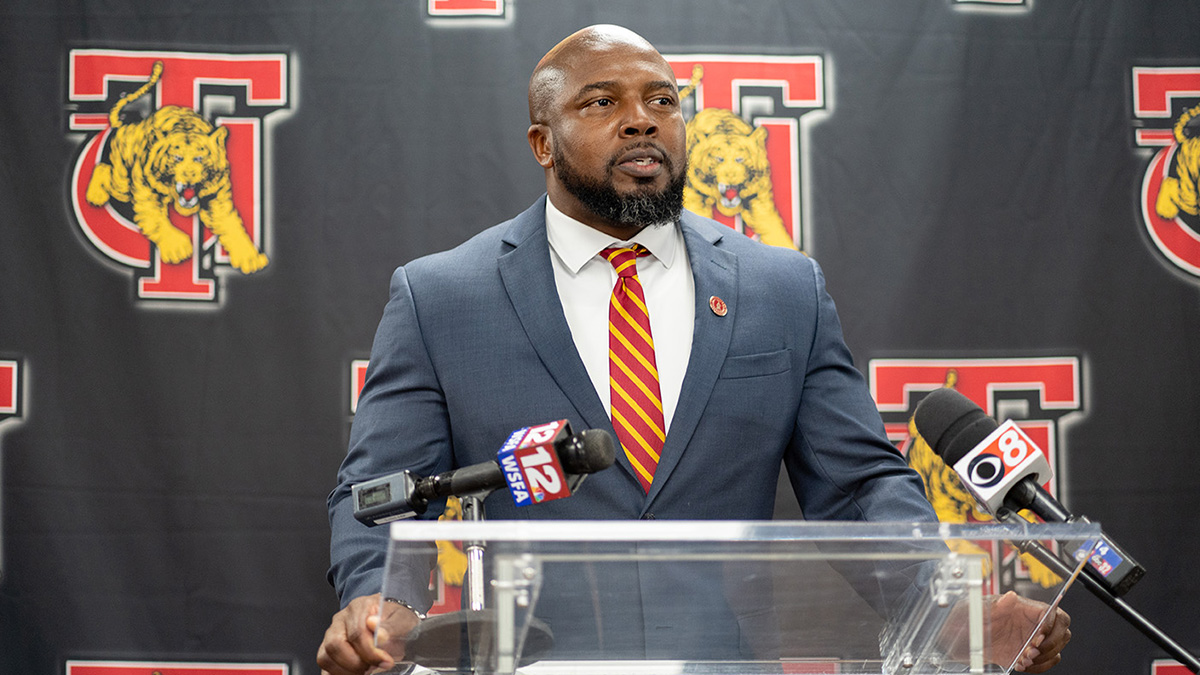 Nearly one year after being revealed as the coach-in-waiting, Aaron James is the point man at Tuskegee.

“I am thrilled to welcome Coach James as our new head coach,” said President Charlotte P. Morris. “His work last season with Athletic Director Reginald Ruffin showed us the dedication to our student-athletes and our football program. I am looking forward to seeing his recruitment efforts this season and how he stacks our team for success next fall.”

Previously, Coach James served as a participant in the NFL Coaching Academy and as the offensive coordinator at Bethune-Cookman. Prior to Bethune-Cookman, he spent nine years at Miles College, where he served as the offensive coordinator, for three years before serving as the quarterback coach. During his time at Miles, 24 of Coach James’ players earned All-SIAC honors in his nine seasons, including 12 First Team and 12 Second Team honorees.

“I am excited about an opportunity to share what I’ve learned with my brothers of Tuskegee,” said Coach James. “I am proud of the accomplishments of my former student-athletes, and I’d like to see Golden Tigers strength as a force in similar ways.”

Coach James was a star quarterback for Tuskegee from 1998-2001, where he compiled an impressive record of 42-5 as a starter. He has the most wins of any signal-caller in Golden Tigers history. He won three SIAC championships during his career, led the Golden Tigers to a 12-0 season and HBCU National Championship in 2000, was an All-Conference selection after the 2001 season and played professionally for the Alabama Lighting of the NAFL in 2004, where he led the league in passing yards and touchdowns. His 91-yard touchdown run record from scrimmage is atop the Golden Tigers list.

James is a native of Pritchard, Alabama and a graduate of Tuskegee, where he holds a Bachelor’s degree in History. He is married to Rosie James and they have two daughters, Erin Morrissette and Layla James.