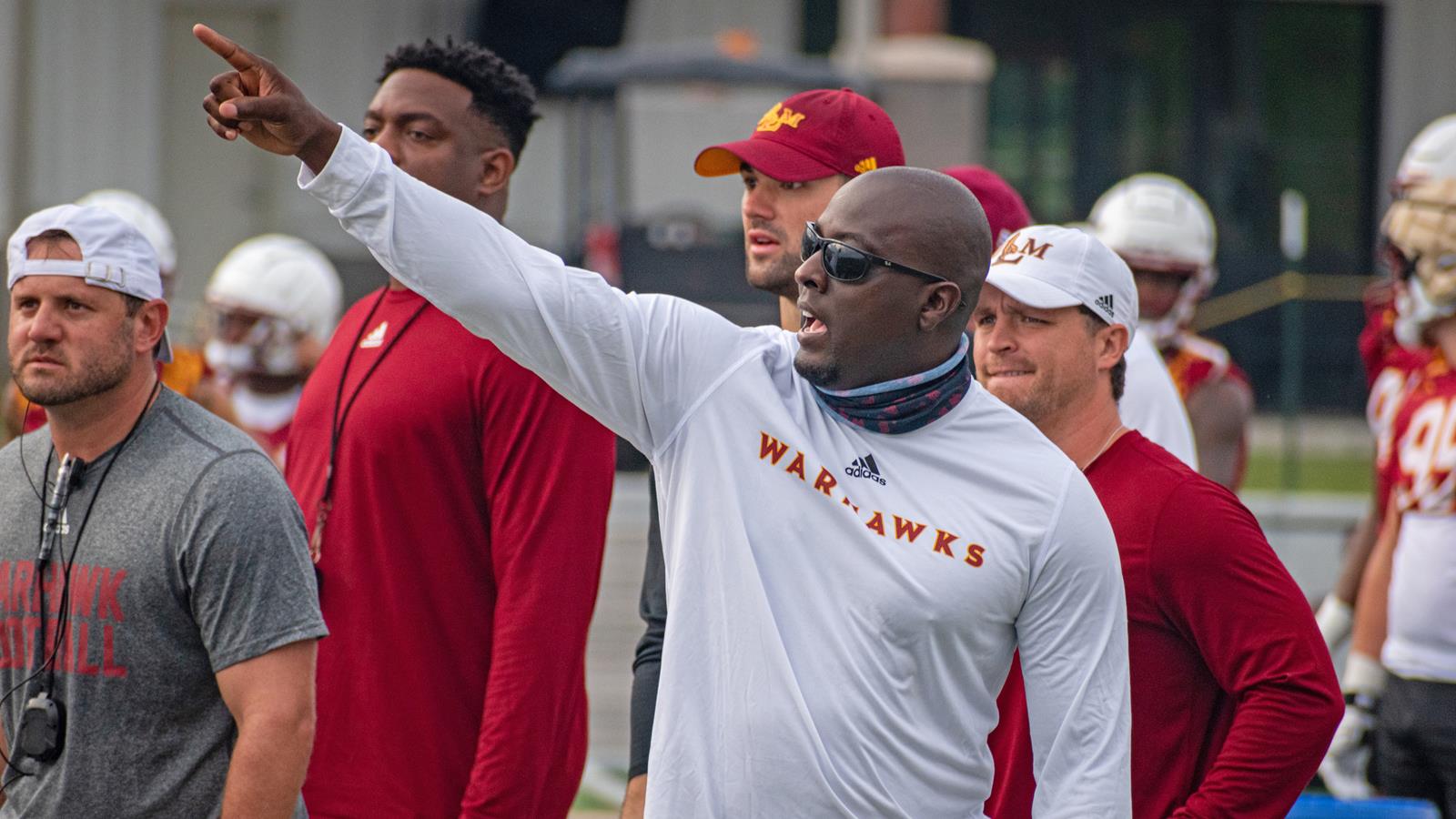 UAPB has hired Louisiana-Monroe assistant Alonzo Hampton to take over its football program.

PINE BLUFF, ARK. – The University of Arkansas at Pine Bluff (UAPB) Director of Athletics Chris Robinson announced Thursday afternoon that Alonzo Hampton has been named the Golden Lions 22nd head football coach, bringing him back to his home state. The Warren, Ark., native will return to one of his previous coaching stops, having been with the Golden Lions five seasons from 2006 to 2010.

A name highly recognized throughout Arkansas and around the nation in college football, Hampton comes to UAPB after serving as the Assistant Head Coach/Special Teams Coordinator under Terry Bowden at the University of Louisiana Monroe.

“I am extremely excited about this new era for the Golden Lion football program and Golden Lion nation and all that it will bring,” said Robinson. I am excited for the student-athletes, student body, university, alumni and the community as we all come together to re-establish our brand. Coach Hampton has a heart for the student athletes and a strong drive to have his team succeed on the field and especially in the classroom. He will bring a positive contagious energy to the University.”

Hampton, a four-year letterman as a defensive back at ULM 1993-96, returned to his alma mater to serve as assistant head coach on Bowden’s staff. After working with the safeties in 2021, Hampton took over the responsibilities as special teams coordinator, heading into his second season.

Under Hampton’s guidance in 2022, ULM special team (punting) was ranked 29th in the NCAA Football Bowl Subdivision and second in the Sun Belt Conference averaging 43.9 yards per punt (Devyn McCormick).

In 2021, three of his safeties ranked among ULM’s Top 10 in tackles, including Jabari Johnson, who recorded a career-high 58 tackles while making seven starts.

“I’m excited to be named 22nd head football coach at the University of Arkansas at Pine Bluff. This institution gave me my first opportunity to coach college football in 2006,” Alonzo Hampton said. “This is a special day for my family and we are grateful as we look forward to pushing this program to new heights.  Also, it means more to come back to your home state. I’ve already reached out to all my friends throughout the state and told them to go purchase their season tickets and come support the Golden Lions. Again, I can’t wait to get there and start building something special that our administration, faculty, staff, alumni and former players will be proud of for years to come.”

Hampton worked as a defensive analyst for Chad Morris at Arkansas in 2019.

He served as special teams coordinator for Willie Taggart at Florida State in 2018. It marked the fourth different time in Hampton’s career that he had joined one of Taggart’s coaching staffs, including previous stops at Oregon, South Florida and Western Kentucky.

Under Hampton’s guidance, FSU’s D.J. Matthews emerged as one of the nation’s most dangerous punt returners in 2018, finishing sixth in the NCAA FBS with his 13.5-yard average (19 returns for 257 yards). Matthews returned five punts for a career-high 145 yards at No. 17 Miami, including a 74-yard return for a touchdown. His 145 punt return yards were the most amassed by an NCAA FBS player in 2018 as well as the third-highest single-game total in Seminole history. His 74-yard punt return marked the longest of his career and also tied for the second-longest punt return in an ACC game during the 2018 season.

During the 2017 season, he served as a defensive analyst at Oregon after spending two years (2015-16) as defensive backs coach at South Florida, where he also oversaw special teams in 2016. USF won a school-record 11 games and finished No. 19 in the final Associated Press Poll, thanks in large part to a defensive unit that forced 26 turnovers, the 18th-highest total in the NCAA FBS, and scored three defensive touchdowns.

During his two-year tenure at USF, Hampton coached two-time All-American Athletic Conference cornerback Deatrick Nichols, who recorded four interceptions each in 2015 and ’16 and finished with 11 career picks (tied for third on the school’s all-time list). The Bulls were ranked 14th in the NCAA FBS with 17 interceptions in 2015, including 13 by the defensive backs.

He also helped mentor D’Ernest Johnson, who earned second-team all-conference honors as a return specialist in 2016 including an 83-yard punt return for a touchdown – the second longest in USF history.

A 19-year coaching veteran, Hampton also experienced successful stints as a high school coach in Arkansas and Georgia. Prior to reuniting with Taggart in Tampa, he spent two years (2013-14) as defensive backs coach at Tift County High School, where he helped lead the Blue Devils to a 7-4 record in 2014 and secured a spot in the Class 6A playoff bracket.

Hampton first connected with Taggart at Western Kentucky, serving as defensive backs coach for two years (2011-12) and helping the Hilltoppers post back-to-back 7-win seasons, including the program’s first postseason bowl appearance in the 2012 Little Caesars Pizza Bowl (against Central Michigan). WKU ranked among the NCAA FBS leaders in total defense (No. 26 at 348.2 yards per game) and pass defense (No. 34 at 209.8 ypg.) in 2012. In addition, the Hilltoppers led the Sun Belt Conference in rushing defense (138.4 ypg.), pass efficiency defense (131.0 rating) and total defense. WKU’s secondary was anchored by future NFL Draft selection Jonathan Dowling (2014: seventh round by the Oakland Raiders).

A native of Warren, Ark., Hampton previously spent five seasons (2006-10) at Arkansas-Pine Bluff where he was part of the 2006 SWAC Western Division title and served in a variety of roles, including defensive backs coach and eventually defensive coordinator in 2009-10. In 2008, the Golden Lions ranked among the NCAA Football Championship Subdivision leaders in pass efficiency defense (eighth with 99.6 rating), pass defense (17th at 160.9 ypg.) and interceptions (29th with 15).

Hampton began his coaching career in the high school ranks in Arkansas, first as defensive coordinator at Warren High School for four years (2000-03) then as head coach at Dumas High School for two seasons (2004-05). During his tenure at Warren, he helped the Lumberjacks to a combined record of 48-12, including back-to-back Class AAA state championships in 2001-02, while also serving as the head track and field coach. While leading the Dumas program, Hampton also completed a minority internship with the NFL’s Philadelphia Eagles.

The former ULM cornerback played his first year (1993) for Dave Roberts and the next three seasons (1994-96) for Ed Zaunbrecher. A two-time All-Louisiana Second-Team selection by the Louisiana Sports Writers Association, Hampton finished his career with 201 tackles, three interceptions and 16 pass break-ups. He served as a team captain as a senior in 1996. Hampton also competed in track and field for the Warhawks in 1993.

“I’m excited to be named 22nd head football coach at the University of Arkansas at Pine Bluff. This institution gave me my first opportunity to coach college football in 2006,” said Hampton. “This is a special day for my family and we are grateful as we look forward to pushing this program to new heights.  Also, it means more to come back to your home state. I’ve already reached out to all my friends throughout the state and told them to go purchase their season tickets and come support the Golden Lions. Again, I can’t wait to get there and start building something special that our administration, faculty, staff, alumni and former players will be proud of for years to come.”

He earned his bachelor’s degree in business administration from ULM in May 1996 and a Master of Arts in teaching from the University of Arkansas at Monticello in August 2002.

Following his collegiate career, Hampton played professionally for the Seattle Seahawks and Jacksonville Jaguars as well as NFL Europe’s Frankfurt Galaxy. He started for Frankfurt in back-to-back World Bowls, including the 1999 championship team.

Hampton and his wife Yolanda have five children, including four sons: Aaron, Rashad, A.J., a fifth-year defensive back at Northwestern, and Ashton; and one daughter, Kenya.