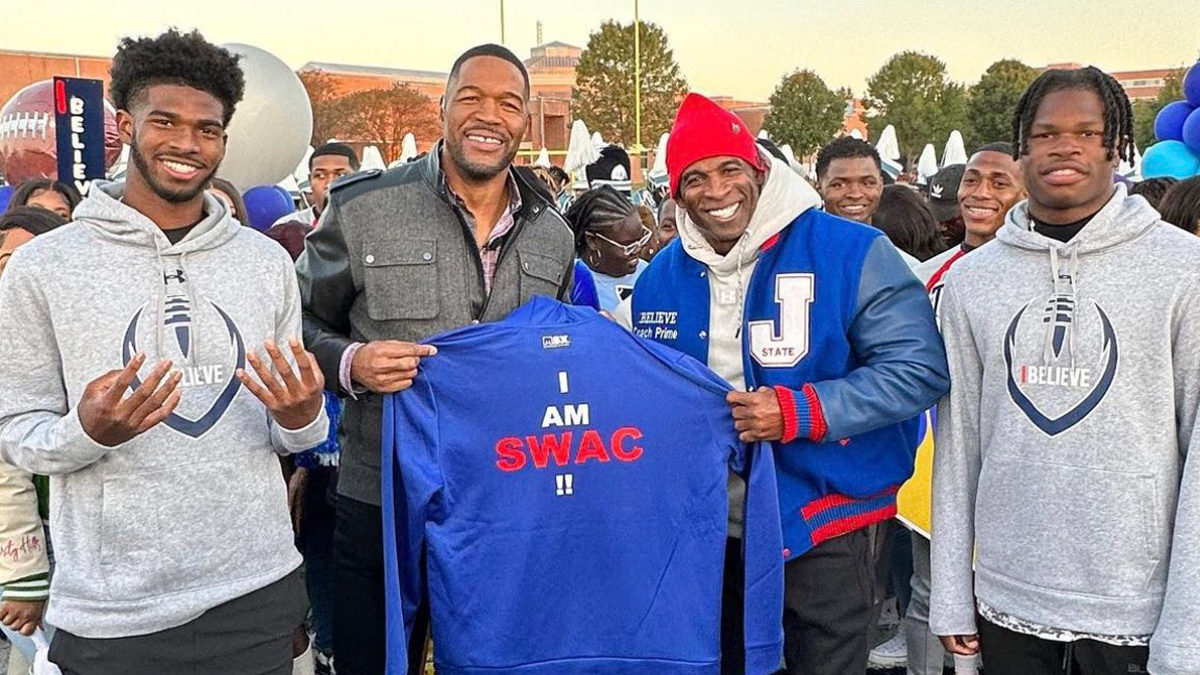 Michael Strahan and Good Morning America came to Jackson State to interview Deion Sanders, his players and the Sonic Boom of The South.

Deion Sanders started the week with an interview on 60 Minutes and on Friday he helped bring Good Morning America to Jackson State.

Texas Southern alumnus and Pro Football Hall of Famer Michael Southern flew out to Jackson to talk to Coach Prime ahead of Saturday’s homecoming game against Campbell.

Strahan spoke with Sanders not only about the impact he’s having on the Jackson State football program, but also the city as a whole.

Not only did Strahan speak with Deion Sanders, he also chatted with two of his players — quarterback Sheduer Sanders and cornerback Travis Hunter.

“It’s amazing, just looking up to him and playing with him, it’s amazing to me,” Hunter said of playing for Sanders. “I looked at all of his film before I got here to make sure I got everything it takes to be who I want to be in life.”

Hunter, the top overall prospect in the class of 2022, says playing at JSU under Coach Prime has helped him develop better habits already.

“When I come here I’m just focused every day. Just focused on the ins and outs of what I have to do,” Hunter said. “I have to be on time everywhere. I normally didn’t do that — so coming here, I had to step up my game.”

Shedeur Sanders has been playing for Deion Sanders all his life. Strahan asked the star quarterback what it was like playing for his father.

“It’s really fun. A couple of months ago, I didn’t understand get why he used to get on me, yell at me…and stuff like that. The more I grew up, matured more, I know he wants the best for me.”

Strahan, whose company is producing a docuseries on Sanders, thanked him for what he’s done to bring attention to Jackson State and other HBCUs. Sanders responded by giving him a gift.

“You keep mentioning Texas Southern — we play them too— but when you come to the game, we want you to wear this.”

Sanders pulled out a shirt. The shirt read.