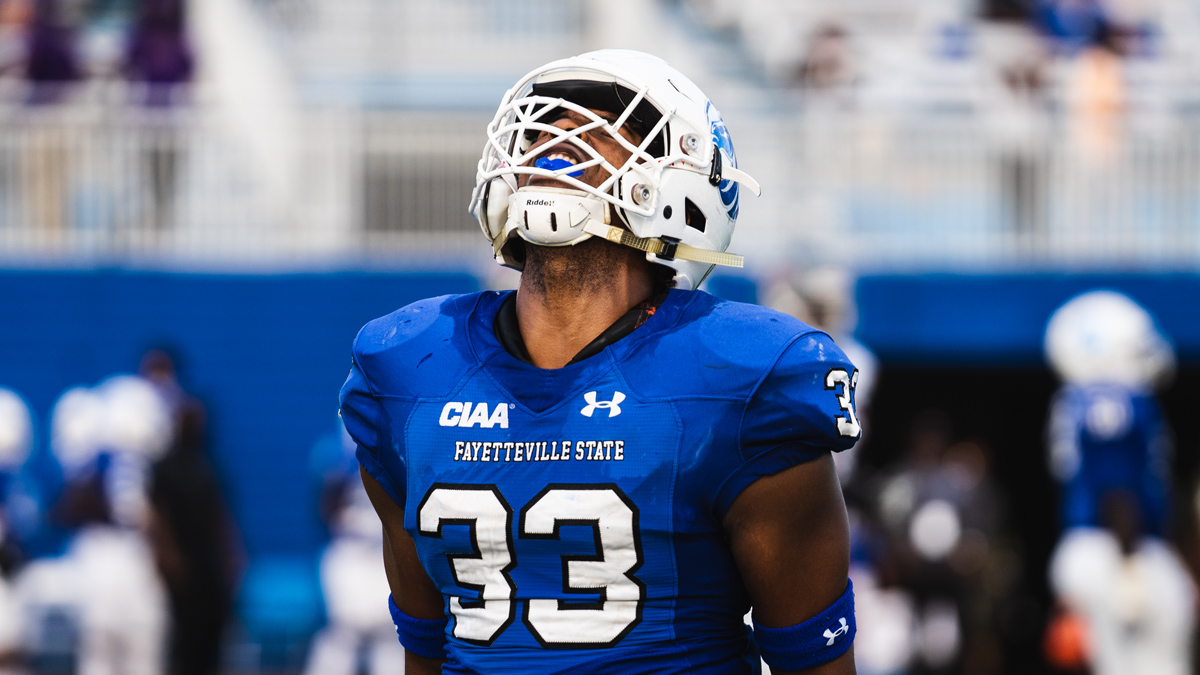 CIAA Football: Will the south ever rise again?

The top of the CIAA South is, at best, competitive with the the CIAA North. The bottom leaves a lot to be desired.

The middle point of the CIAA’s regular season is a good time for reflection.  After all, the conference has worked through its non-conference schedule, followed by cross-divisional play.  Divisional games are a gauntlet, partially because of injury, combined with spirited rivalries and familiarity.  But before this week’s divisional games begin, here are some highlights from the first half of this season:

Fayetteville State (2-1, 3-2) has been awesome or downtrodden depending on where you look.  Its defense only allows 16.4 points a game, is 14th best in the country in third down conversion defense, and is third best in the country in turnover margin at +10.  Defensive lineman Devin Cowan and defensive end Cameron Merrell look like conference player of the year candidates.  Cowan has nine tackles for loss (17th in Division II) and five sacks. Merrell has 5.5 sacks of his own, ranking eighth of all Division II players. Those two players have the majority of FSU’s sacks (17). Defensive back Brandon Barnes-Brown (two interceptions), continues to anchor the secondary. Special teams has also been good to great.  Punter Jacob Young is the only punter in the conference averaging more than 40 points a game.  Kicker Elton Andrew is one of the conference’s top kickers, and seems to have shaken off the early season struggles.

FSU’s offense is problematic, and not in a good way.  The offense is fourth worst in the conference in total offense (216 yards, which is actually 152th in Division II).  They are the second worst in the conference in third down conversions (23 percent), and they actually score LESS points per game then the defense gives up (15.6 points).  The offense is why FSU has ended up within 14 points of every opponent this season, win or lose.

Perennial bridesmaid Shaw (2-1, 2-3) looks like the likely challenger to unseat FSU in the divisional race.  Wide receivers Ah’Shaan Belcher and Jon Brown (combined for 549 yards, five touchdowns) have been matchup problems for opposing defenses, and defensive backs Akeythio Carson (37 tackles, five tackles for loss and an interception) and Jaleel Scroggins (32 tackles) are solid leaders on defense. The Bears have a number of vulnerabilities that range from relatively minor to very concerning.  First, their vaunted running game, which is three-deep in capabilities, hasn’t really produced as much as you would expect from a contender at 145 yards a game. Secondly, the Bears have struggled with injuries, and those injuries have left them exposed to opponents exploited those areas at times. A good example, is Belcher, who was out last week against Virginia State.  Lastly, the Bears are struggling on the road, having not yet won a game away from Durham County Stadium.  The Bears travel to Fayetteville State in a game that could decide the divisional race on this side of CIAA football.

Johnson C. Smith (1-2, 1-3) has likely been relegated to spoiler in the divisional race.  The Golden Bulls took a huge leap in offensive prowess coming out the gate this season, spearheaded by quarterback Tyrell Jackson, who is ninth in the country in passing yards per game at 299 yards. Whether Jackson continues his pace is a question mark given that he was injured last week against ECSU.  His top target has been wide receiver Brevin Caldwell, who leads the conference in receiving yards (429). JCSU is also tied with Bowie State for being tops the conference in converting third downs at 50 percent.  JCSU’s problem is its defense, who has been prone to late-game collapses.  Ignore that they score more points (35) than they give up (28), as that average is skewed because of the colossal points they put up against ECSU. Maybe its best defensive posture is that they lead the country in time of possession at 36 minutes a game, keeping those opposing offenses off the field. Also, special teams has been an adventure, with freshman Jay Haggins still developing into that role.

The rest of the south is just fighting to stay out of the basement, as they share a common issue – scarcity of offense.  Livingstone (0-3, 1-4) is the second worst in the country in total offense at 177 yards a game, though it fares better when newcomer quarterback Silas Cruse is playing. He has been hurt at times.  The Blue Bears continue their struggles in running ball, as they are second worst in the country in rushing yards at 25 yards a game. The averages may be skewed too far to the downside though, because the Blue Bears have played the three best Northern Division teams in their crossover games.

Winston-Salem State (0-2, 0-4) continues its slide into irrelevance.  WSSU sports a somewhat capable defense, particularly its secondary, who has notched five interceptions this season.  But the defense has struggled to get pressure on quarterbacks, as it only has three sacks so far.  The defense’s lack of production is wholly overshadowed by its offense, which is the second worst in CIAA football in total offense (205 yards, tied for 158 in Division II), fourth worst in the country in passing yards (73 yards a game), and only scoring 11 points game.  WSSU’s problems involve a stale offense heavily predicated on the run game, and lack of consistency at quarterback. The bright stop are running back Asa Barnes (282 rushing yards, 3.9 yards a carry) and wide receiver RJ Mobley (nine receptions, three touchdowns).

St. Augustine’s (0-3, 0-5) will challenge WSSU and Livingstone for bottom feeder supremacy. The Falcons are worst in the country in scoring defense at 58 points a game, and is also scoring just 11 points game. SAU has shown quite a bit of fight in games, recently pushing Bowie State in the fourth quarter before succumbing due to turnovers.  They are still a young team, and are going through numerous growing pains, although linebacker Lee Sales (35 tackles, four tackles for loss, two sacks, and one interception), and wide receivers Jordan Black and Deandre Proctor (combined 24 receptions, 276 yards, two touchdowns) are productive at their positions.

CIAA Football: Will the south ever rise again?