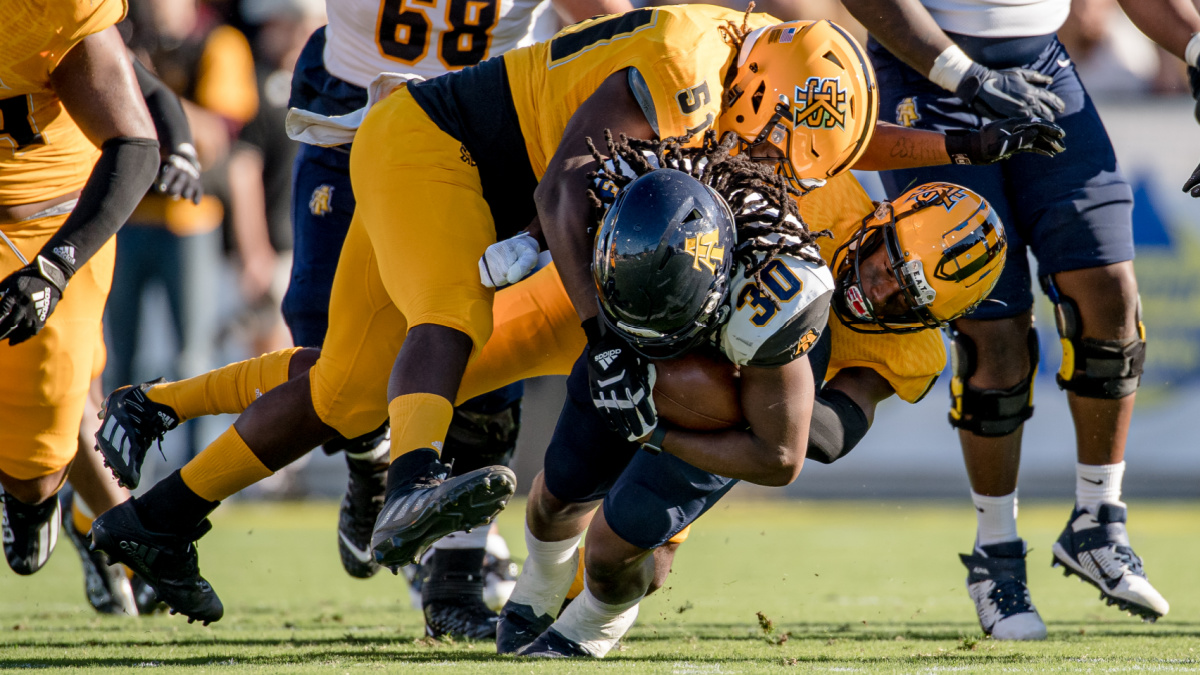 The North Carolina A&T Aggies received their first Big South loss after an offensive struggle against the Kennesaw State University Owls on Saturday evening. The Owls shutout the visiting Aggies by a score of 14-0 in the two programs first ever matchup.

The Aggies began the game on the wrong foot after a missed 25-yard field goal attempt on the opening drive. Junior quarterback Jamie Fowler led the Aggies down the field with 70 yards of offense on 15 plays. The Aggies also converted on four out of five third-down attempts but came up cold in the red zone.

A&T’s defense bailed out their offense by recovering a fumble on KSU’s first drive. Senior defensive end Jermaine McDaniel made the play to give the Aggies possession with three minutes remaining in the first quarter. The Owls were at the Aggie’s 37-yard line when the turnover was forced. It was a big play by McDaniel as the Owls were driving easily down the field. Unfortunately, A&T had a quick three-and-out drive and was not able to convert off of the turnover. Neither offense found any rhythm in the first quarter.

KSU got on the board first midway through the second quarter. They converted on a fourth and short to keep their drive alive before finding the endzone. Sophomore quarterback Xavier Sheperd scored on a QB keeper for a 3-yard touchdown run.

Both teams were continuously forced to punt before the Aggie defense made another big play. North Carolina A&T recovered their second fumble of the game with two minutes to go before the half. The fumble recovery was made by sophomore defensive lineman Octavious Pringle. Fowler began the following drive at the 50-yard line. A 15-yard facemask penalty against the Owls defense helped the Aggies even further down the field. Several incomplete passes kept the Aggies from the endzone and the team was forced to try for three. Unfortunately, freshman kicker Christopher Brown missed his second field goal on a missed 37-yard attempt.

A&T’s defense made another play on the Owl’s following drive. Freshman defensive end Henry Daniel snagged an interception off of KSU’s Xavier Sheperd. The Aggies offense took the field with seconds to go in the second quarter. It was not enough time to get downfield before the end of the half. The halftime score remained 7-0 at halftime. The score did not change until late in the third where Xavier Sheperd found the endzone for another touchdown. The Owls went up 14-0 with one quarter to go.

North Carolina A&T entered the game with the No.1 rushing defense in the Big South. The Kennesaw State Owls brought the second-best rushing offense to the game. The Aggies defense held up well as they only allowed 222 rushing yards against an Owls offense that has been averaging 288 per game. They also forced three turnovers and continued to put the offense in good position. The Aggies offense was never able to capitalize off the defensive performance. A&T now falls to 3-3 overall with a 2-1 conference record. They will take on Hampton next Saturday.