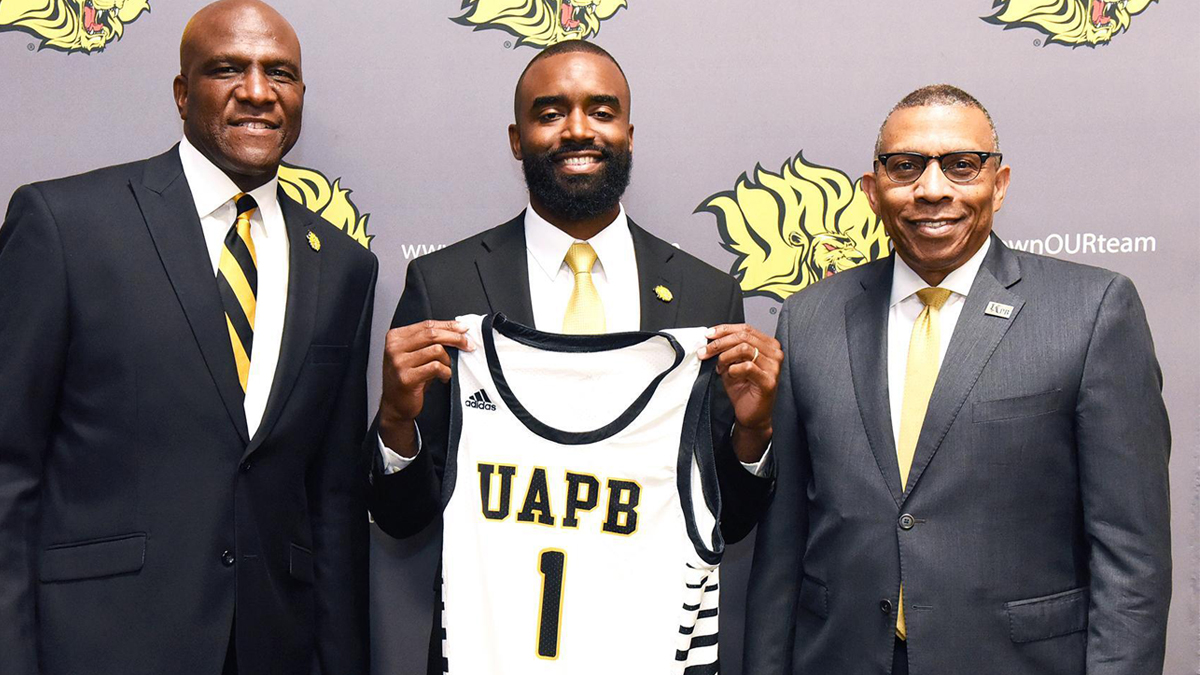 Solomon Bozeman showed up to his introductory presser as UAPB head basketball coach and made it clear that it is a new day.

Bozeman, who spent the last three seasons as an assistant coach at Oral Roberts University, helped the Golden Eagles improve their conference wins each year and make a Sweet 16 appearance in the 2021 NCAA tournament, the first since 1974. He takes over for George Ivory, who retired following the 2020-2021 basketball season.

“I expect to win here. And I’m not planning on taking two-to-three years. We want to get this thing done, Year One.”

“The Golden Lion Nation is excited to welcome Coach Bozeman to The Pride,” UAPB AD Chris Robinson, UAPB director of athletics, said in a satement. “Bozeman has an amazing reputation when it comes to recruiting and player development. We’re confident he will position our men’s program as a powerhouse team in the SWAC and increase our recruiting footprint within the state.”

Bozeman’s influence was evident as Oral Roberts captured the Summit League Conference Tournament Championship, its first appearance since 2008. After earning the No. 15 seed in the NCAA Tournament, the Golden Eagles reached the Sweet 16 with wins over the No. 2 seed the Ohio State Buckeyes and the No. 7 seed Florida Gators. Additionally, Bozeman played a major role in recruiting and developing players at Oral Roberts, having recruited Deondre Burns and RJ Glasper who were both a part of the All-Conference and Newcomer Teams.

Bozeman, an Arkansas native, also spent two seasons as an assistant coach at his alma mater, the University of Arkansas Little Rock (UA Little Rock). While there, he recruited and played a crucial role in the development of Rayjon Tucker, who currently plays for the Philadelphia 76ers. Before returning to UA Little Rock, Bozeman spent two seasons at Abilene Christian, where he helped Joe Golding build his program by recruiting three All-Conference selections—Jaylen Franklin, Jalone Friday, and Kolton Kohl— who later led Abilene Christian to two NCAA Tournament appearances.

Bozeman played professionally in the D League and in a number of leagues overseas after staring at Arkansas-Little Rock.  While attending UALR, Bozeman was one of the most decorated student athletes in the school’s history and earned AP All-American honorable mention, Sun Belt Conference Student Athlete of the Year, and Sun Belt Player of the Year. He hit the 3-pointer—with 1.5 seconds remaining—to lift UA-Little Rock to a 64-63 win over North Texas in the 2011 Sun Belt Tournament championship sending the Trojans to their fourth NCAA Tournament.

Bozeman earned a Master’s in Sports Management from UA Little Rock. He and his wife, Myla, have been married for six years.