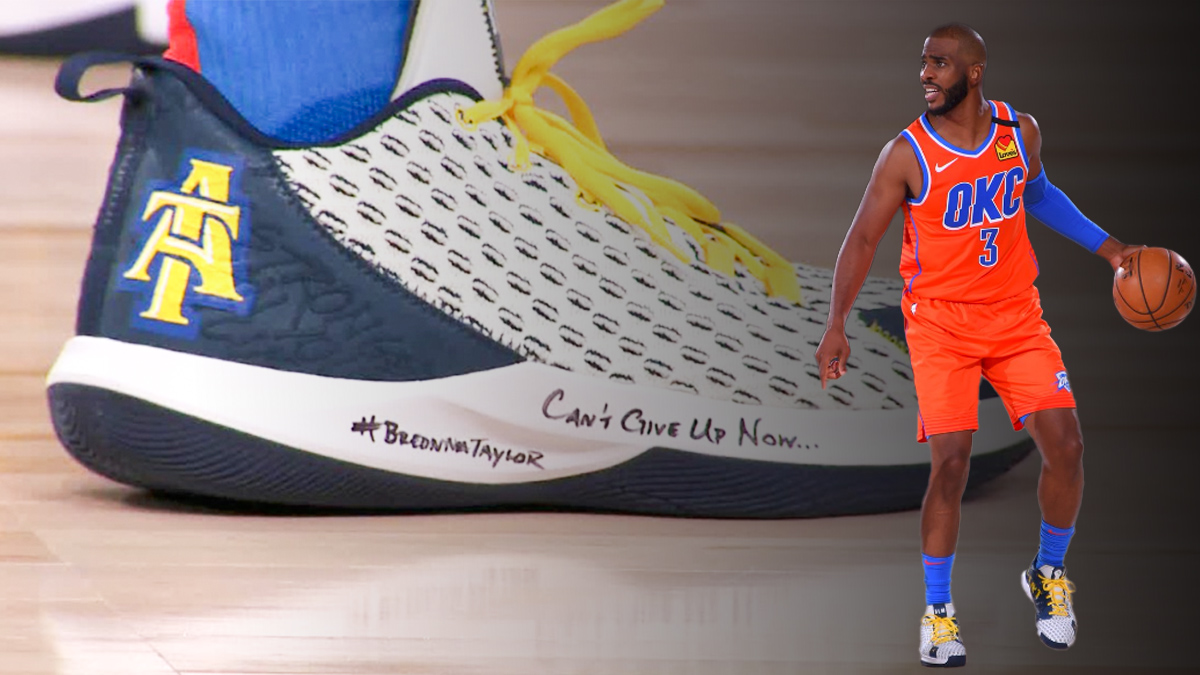 Chris Paul balled out in the NBA Bubble. But he also proved to be a leader, an activist and managed to show an HBCU some love.

Chris Paul not only made his NBA Bubble debut, he made several big statements.

The Oklahoma City Thunder point guard took a knee before the national anthem, wore sneakers representing an HBCU with a message about Breonna Taylor and put on a show on Saturday.

Chris Paul led OKC to a 110-94 win over the Utah Jazz at the NBA Bubble in Orlando on Saturday. He scored 18 points on 7-for-11 shooting. He also dished out seven assists and grabbed seven rebounds in the win.

He arrived at the game wearing an Ayantee t-shirt, a nod to North Carolina A&T. Paul announced a partnership with the school earlier this year.

Paul and his teammates then took a knee during the playing at the Star-Spangled Banner. This gesture was significant as a Republican representative threatened the franchise’s tax benefits if the team kneeled during the song. They did it anyway.

Once Paul got on the court, the focus turned to Paul’s sneakers. The All-Star point guard and North Carolina native wore a pair of Jordan brand sneakers with A&T’s logo and nickname on either side.

At the base of the shoe was a written message with Breonna Taylor’s name hashtagged. Taylor was a 26-year-old black woman murdered by police officers earlier this year. The officers who killed her have not been charged. Above her name was scribbled “Can’t Give Up Now.”

We’ve long praised Paul for his creating awareness around HBCUs, as well as giving to them. He has relationships at several HBCUs, including Winston-Salem State, North Carolina Central and others as well as A&T. He’s also producing a documentary on HBCU basketball.

On Saturday afternoon, however, he and his teammates made statements that go beyond just supporting black colleges.

We loved to see it.