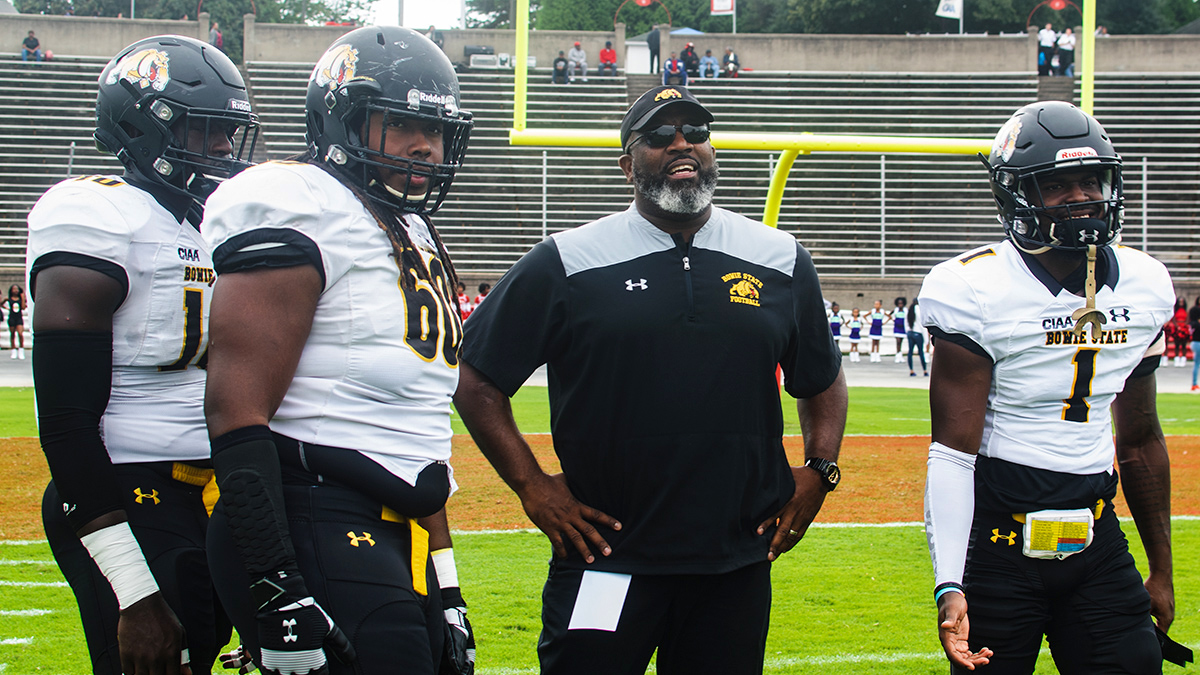 In his first season as a starter, Johnson led the league with a 170.5 pass efficiency rating, currently ninth best in Division II, and ranked second in total offense at 227 yards per game. A native of Washington, DC, Johnson finished the regular season with 1507 yards passing, 21 touchdowns, and a 62.4 completion percentage, ranking top four or better in the CIAA in all three categories. The junior signal-caller was also the conference’s sixth-leading rusher with 771 yards and fourth with 11 rushing touchdowns, leading all CIAA quarterbacks in both statistics. Johnson and the Bulldog offense led the CIAA with 44.4 points per game.

Morsell, a native of Upper Marlboro, MD, led the CIAA with nine interceptions with three being returned for touchdowns, both of which lead Division II. The sophomore defensive back also leads the conference with 14 passes defended while totaling 31 tackles in ten games. Morsell helped a Bowie State defensive unit hold teams to a league-best 16.3 points per contest.

Souza led all CIAA kickers with 15 made field goals on 16 attempts with a long of 49 yards, also tops in the league. The junior from Deerfield Beach, FL leads Division II with a 93.8 field goal percentage and is the CIAA’s third-leading scorer at 8.1 points per game (73 total). Souza also ranks seventh in the league with a 35.3 punting average.

Bowie State Head Coach Damon Wilson was voted CIAA Coach of the Year by league media and coaches. Wilson led Bowie State to an undefeated 10-0 regular season and a second straight CIAA Northern Division title. His team is currently ranked #13 nationally in Division II and the only undefeated HBCU in the country. Wilson has led the Bulldogs to back-to-back appearances in the CIAA Championship game.

Leading the All-Rookie selections are Offensive Rookie of the Year Emanuel Wilson of Johnson C. Smith and Defensive Rookie of the Year Jonathan Ross of Bowie State. Wilson, a running back from Charlotte, NC, led all CIAA rookies with 1,040 rushing yards and 6.5 yards per carry, ranking third in the league in both categories, while leading all freshmen with 13 rushing touchdowns, second-best in the conference. A defensive lineman from Waldorf, MD, Ross finished with 34 total tackles while leading all CIAA rookies with 11 tackles for loss and 4.5 sacks, finishing within the top 15 among league leaders in both.