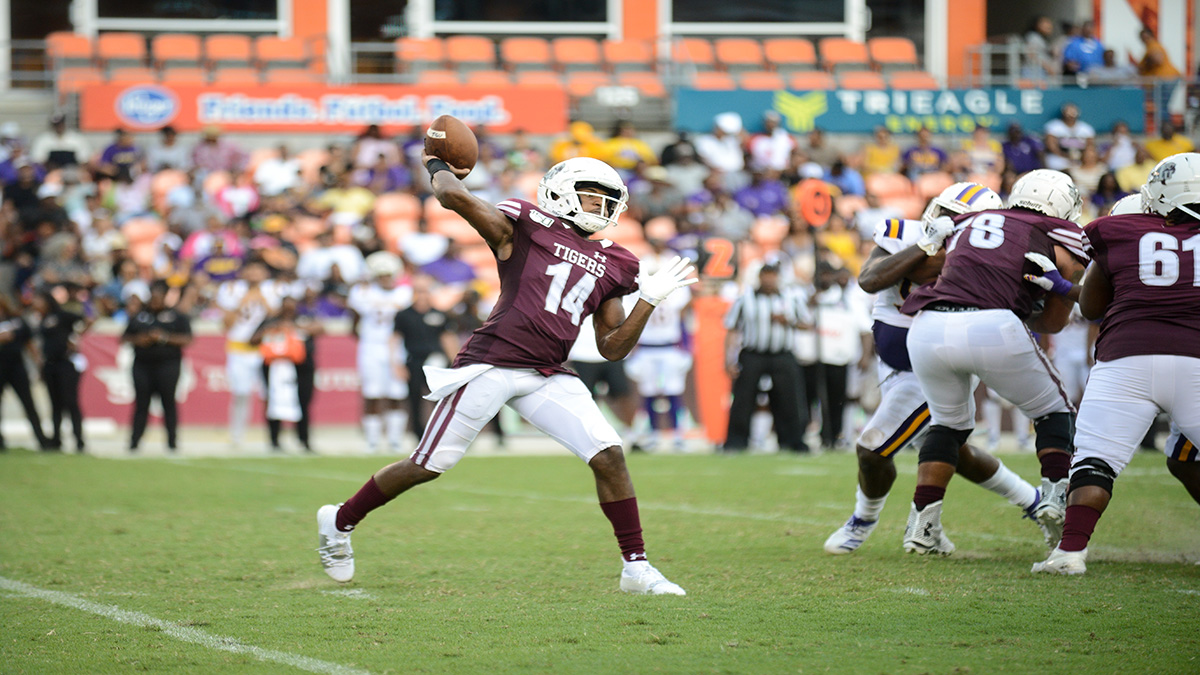 SAN ANTONIO – It was a tale of two halves as Texas Southern fought back from an early deficit with a furious third quarter rally but fell short at the end as Incarnate Word won a wild shootout by a 63-44 margin at Benson Stadium Saturday night.

The Cardinals claimed an early 14-0 lead after two early touchdowns in the first quarter. TSU would find the scoreboard for the first time on its second possession as Chris Long caught a 15-yard reception from DeAndre Johnson. The Tigers would get a big stop on the ensuing defensive possession and the offense took advantage as Richard Garcia III nailed a 25-yard field goal for a 14-10 deficit at the 14:51 mark of the second quarter.

UIW would answer on the ground on the ensuing drive as Kevin Brown broke free for a 32-yard run en route to a 21-10 lead after the PAT. The tide of the game would turn back to UIW minutes later as the Tigers fumbled the kickoff which led to UIW recovery and a 30-yard touchdown. Carson Mohr’s PAT was good as the deficit increased to 28-10 with 13:01 left.

TSU’s next drive would stall at the UIW 45 and the Cardinals went to their run game to set up a 3-yard touchdown for a 35-10 margin after the PAT. The Tigers would force a big fumble deep in their own territory on the next defensive possession and the offense rewarded them for their efforts as Tren’Davian Dickson took a pass from Johnson 87 yards for the touchdown. Garcia III’s PAT was good as they trailed 35-17 with 5:02 remaining. Unfortunately, the momentum was short-lived as UIW tacked on another touchdown late in the half to go into the locker room on top 42-17.

Despite the slow start, the Tigers came out in the third quarter full of energy as they marched down the field 75 yards in six plays as Dickson scored on a 15-yard pass from Johnson. UIW would answer with a touchdown but the Tigers kept on fighting as freshman LaDarius Owens had an impressive 49-yard scoring run followed by 1-yard touchdown run on the team’s next drive to cut the deficit to 49-37 after the PAT with 6:10 left in the third quarter.

The Tigers had an opportunity to make a key stop early in the fourth quarter but UIW’s Kam Williams beat the defender on one-on-one coverage for a 70-yard reception on 3rd-and-16 with 9:53 left. The UIW offense would add another score six minutes later but TSU continued to fight as Devin Williams found Roylain Oliver for a 3-yard touchdown reception with 15 seconds remaining.

The Tigers would finish Saturday’s wild affair with 505 yards of total offense. Johnson passed for 331 yards on 20-of-30 attempts with one interception while Dickson put together a career-high 220 yards on seven receptions with two touchdowns. Owens once again finished a few yards short of 100 yards with 94 yards on 14 attempts with two touchdowns. Defensively, Josh Murray had 11 stops followed by eight from Ike Onwuasoanya.