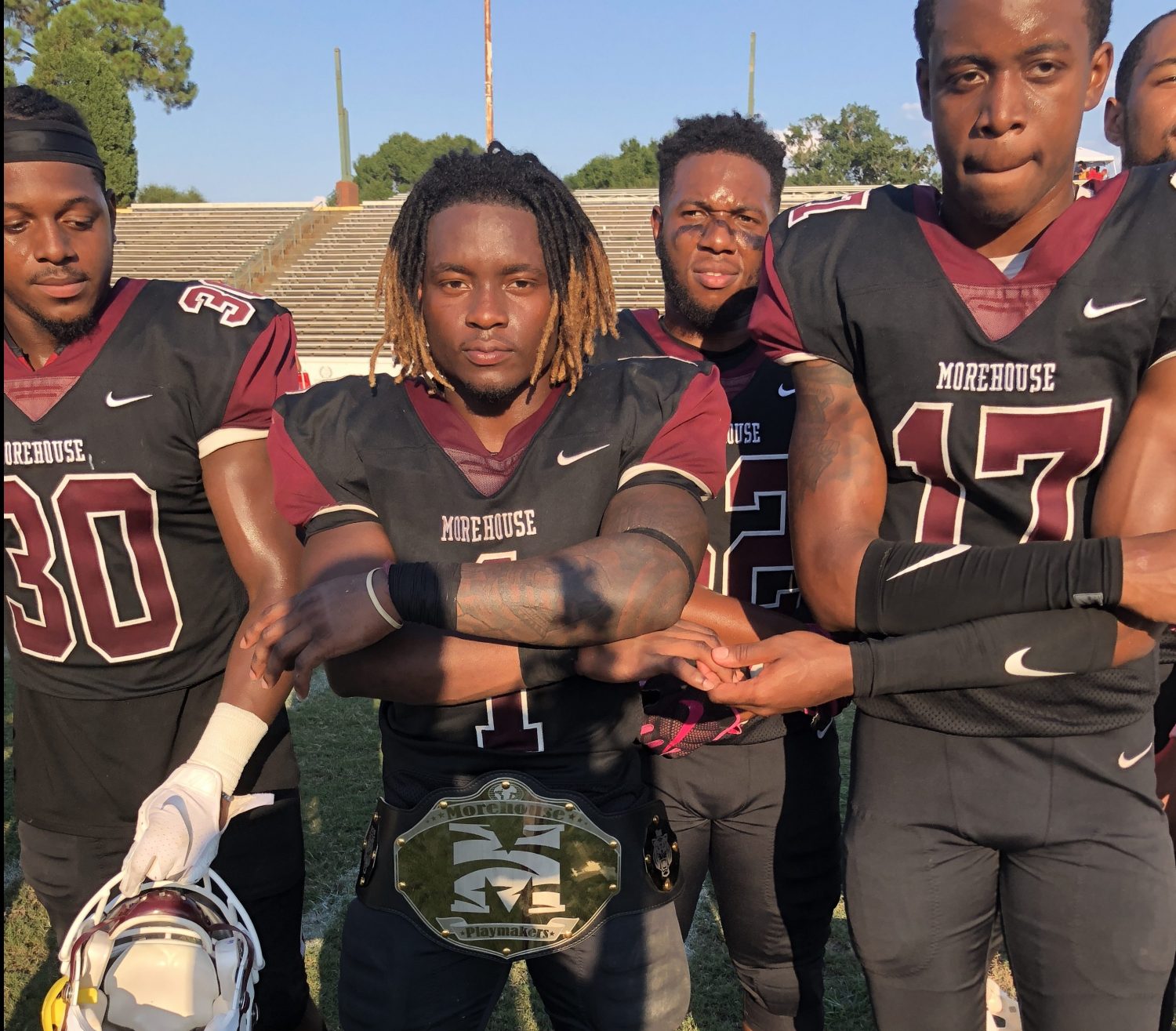 Morehouse gets over the Tuskegee hump in dramatic fashion

Santo Dunn comes on strong with the game on the line.

COLUMBUS, GA–The beads of sweat rolling down Rich Freeman’s forehead told you everything you needed to know about the Tuskegee-Morehouse Classic. It was unbearably hot all afternoon, the 91 degrees at kick-off was the hottest classic temperature wise since 1954.  And the story of his sweat also showed that outcoaching Willie Slater for only the second time in his career made for a pressure-filled afternoon.

“Emotions took over with me. I squandered a couple of critical timeout calls and I couldn’t get them back. But Romans 8:28 says all things work together and that led to three overtimes and we were blessed to win the ball game,” Freeman said.

If you want to go Biblical this wasn’t quite David over Goliath but for nearly the last decade it might have felt that way in Atlanta. Morehouse (6-0) finally got over the hump of Tuskegee (3-3) with an epic 30-24  triple-overtime win in Columbus. Tuskegee hadn’t lost to Morehouse in the last eight years. For the last year, the Maroon Tigers have had to deal with the memories of this same game in 2017 that they should have won.

First TD of the day. 8 plays 74 yards and #Skegee leads 10-3 over Morehouse in 2nd qtr pic.twitter.com/VSArsJL1m3

The game played out like a 15 round heavyweight fight, with both teams jabbing their way to a ten point tie at halftime. Tuskegee put the first touchdown on the board early in the second quarter on a Justice Owens two-yard run. Morehouse responded four minutes before halftime with a Santo Dunn 42-yard touchdown run.

Early in the third quarter Tuskegee went back to the well with Owens on another two-yard run to take a 17-10 lead.  That seemed like it might be the final outcome after both offenses stalled for the rest of the way. Morehouse had one final crack at a score late in the fourth quarter and had to go against the grain to make something happen.

The Maroon Tigers dug into their bag of tricks with 1:33 to go in regulation on a halfback pass from Frank Bailey Jr. to Tremell Gooden. The defense held Tuskegee in the final minute of regulation as the game headed into overtime.

The first overtime saw missed field goals by both teams. Ironically, Tuskegee coach Willie Slater predicted on Wednesday that the outcome would be decided by the kicking game.

In the second overtime, Tuskegee decided it was time to come out of the box. Javarrius Cheatham caught Morehouse off guard when he transformed himself from a receiver into a runner on an end around, scoring on a ten-yard run. Morehouse wasted no time on the possession flip, with Dunn immediately scoring on a 16-yard run.

To be the man you’ve got to beat the man. @morehouseathletics with the Ric Flair moves today.

The third overtime forced both teams to go for a two-point conversion if they scored a touchdown. Morehouse rode its workhouse going back to Dunn, who scored on a 14-yard run, but the two-point conversion failed. It ultimately didn’t matter as the Morehouse defense stepped up and stuffed Tuskegee on a fourth and one.

Santo Dunn rushed for 125 yards with three touchdowns, while Michael Sims was 24-32 passing for 196 yards. The Morehouse defense held Tuskegee’s Ahmad Deramus to 145 yards passing with an interception while sacking him five times. Taurean Taylor had a career-high 90 yards rushing for Tuskegee.

Morehouse gets over the Tuskegee hump in dramatic fashion