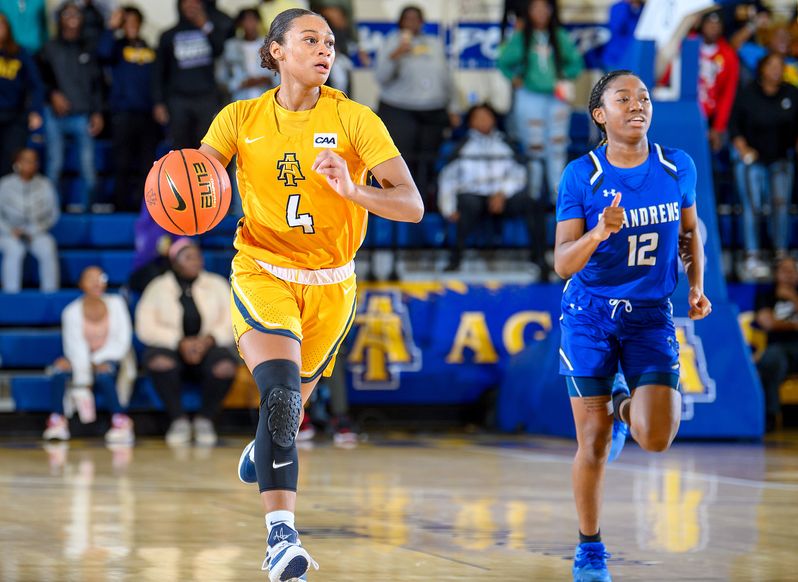 The North Carolina A&T women got all they could handle from Arkansas Pine-Bluff but managed to come away with a win over the SWAC squad.

CORAL GABLES, Fla. – A big fourth-quarter run returned the North Carolina A&T Aggies women’s basketball to the winner’s circle Sunday afternoon with a 64-59 win over the University of Arkansas-Pine Bluff (UAPB) Golden Lions during the final day of the Miami Thanksgiving Tournament hosted by the University of Miami at The Westco Center.

A&T has won four of  five to improve to 4-2. UAPB dropped to 1-4. UAPB led 56-52 with 4:07 remaining, but Laila Acox started an Aggies run that would win the game by following her miss to cut UAPB’s lead to two. Nyah Willis tied the game at 56 on a pull-up jumper off a turnover with 2:30 to play.

A minute later, junior guard Maleia Bracone hit two free throws to put the Aggies ahead. Acox ended the run she started with a jumper set up by her steal before she scored on a layup from a Bracone assist to complete the 10-0 run, giving the Aggies a 62-56 lead with 57 seconds remaining.

Golden Lions guard Jelissa Reese responded with a 3-pointer seconds later to cut A&T’s lead to three. But sophomore Jordyn Dorseymade two free throws with 24 seconds remaining. UAPB traveled on their next possession to ice the game for A&T.

Willis led the Aggies with a game-high 15 points, shooting 5-for-8 from the field, with five rebounds and four assists. Bracone added 10 points and a game-high six assists. Acox scored six of her eight points in the last three minutes of the fourth quarter and secured seven rebounds and two steals on 4-for-6 shooting for the game. Jazmin Harris finished with nine points and 10 rebounds.

The Aggies maintained a lead throughout the second quarter and entered the locker room at halftime with a 28-24 lead. UAPB did tie the game at 28 by scoring the first four points of the second half. But Jazmin Harris helped A&T strike back with back-to-back buckets as A&T kept the lead throughout the remainder of the third quarter.

Aggies redshirt freshman Chaniya Clark cut the Golden Lions lead to two, 54-52, with 4:35 remaining. However, Maori Davenport responded with a bucket in the paint to put UAPB up four before the Aggies could put together their game-winning run.