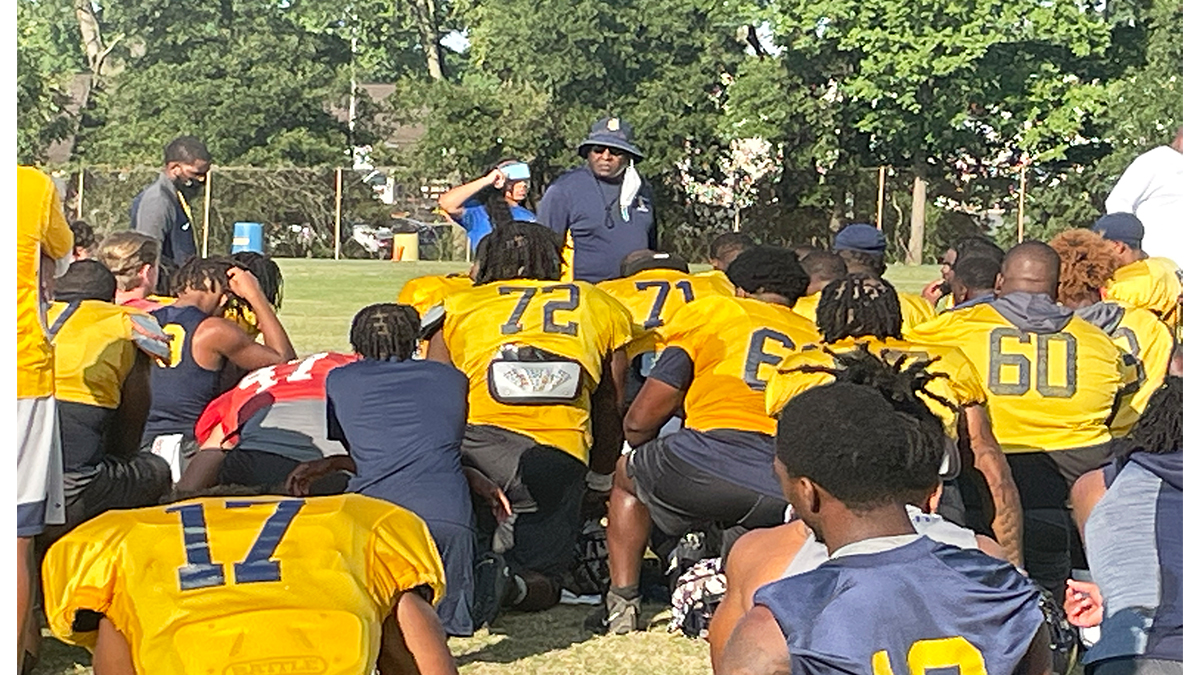 NC A&T looking for redemption in 2022

NC A&T head coach Sam Washington presides over a meeting with his players after a practice this week. The Aggies are looking to bounce back from a 5-6 finish in 2021.

There was nothing pretty about NC A&T”s 2021 football season. The Aggies finished 5-6 overall, only 3-4 in its new conference, the Big South. It was the first losing season for the Aggies in a decade and the first for fourth-year head coach Sam Washington.

After winning three straight and sharing two others of the last six championships on its way out of the Mid-Eastern Athletic Conference and prevailing in four of the five season-ending Celebration Bowls, NC A&T’s first season in the Big South was a huge disappointment.

Injuries, COVID-19 casualties and the lack of spring practice in 2021 certainly affected the Aggies outcome. But those are just excuses.

“We just played bad football last year,” Washington said as he prepared his team Wednesday for its second and final year in the Big South. The Aggies will join the Colonial Athletic Association (CAA) next season.

Washington said the team has been singularly focused in its preparation.

One priority Washington said is to “stay healthy” and just have fun, enjoy what you’re doing. “Football should be fun, not a chore,” he said. “And that’s one of the things that I’ve noticed. Guys just love to come out here, get after it and compete. So I’m excited to see how good we can become.”

The march begins on Sept. 4.

The march to redemption begins on Saturday, Sept. 4 when the Aggies meet former MEAC rival NC Central in Charlotte at Panthers’ Stadium in the new Duke’s Mayo Classic.

NC A&T easily handled the Eagles last season in Greensboro, winning 37-14. Some things have changed since then.

Courtney Coard, who spent the last three seasons as co-defensive coordinator for the Aggies and a total of nine years as their defensive line coach, now leads the defense at NCCU, his alma mater. Coard spent all of that time at A&T under or beside Washington, who was the Aggies defensive coordinator before assuming the head coaching responsibilities. Washington ran the defense with Coard over the last three seasons.

“Nah” Washington said while smiling. “No more than he’s gotta be concerned that I know more about his. I think if there’s someone that had to be concerned, it would be him. I think you will see some similarities in terms of the way we do things and how we play the game.

“But the old dog, knows some new tricks,” he said. “I think if we go into the game healthy, we’ll be fine.”

The mantra at NC A&T is stop the run, protect the football and win the kicking game. That hasn’t changed Washington said.

Among the top areas of concern however for the Aggies were shoring up the defensive secondary and getting better and more consistent good play from the quarterback position. Washington said both those areas have been addressed.

“I’m just looking forward to playing,” he said. “You’re going to see a world of difference.”

NC A&T looking for redemption in 2022