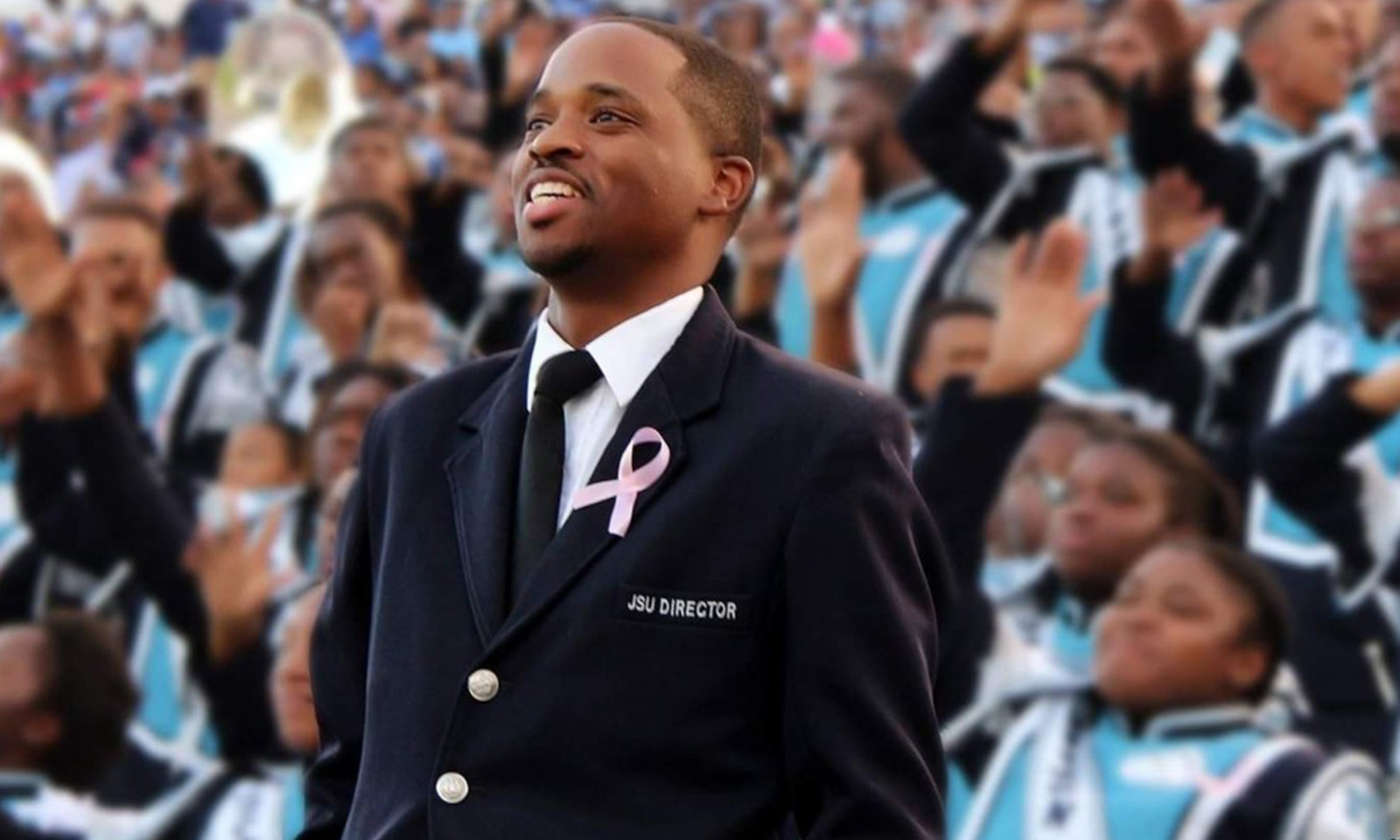 “Without the tireless work of these outstanding gentlemen, this opportunity would not be afforded to me. Whenever presented with an honor or recognition, I have to thank others for attributing to my accomplishments.”

Dr. Roderick Little is the new director of bands at Jackson State University, replacing Dowell Taylor, who will retire on June 30, after 34 years of service to JSU.

“Other than my family, this is amongst the highest honor that I have been bestowed. I am humbled and ready to propel our great program forward,” said Little.

At 34, Little is one of the youngest band directors and arrangers in the school’s history. He joined the JSU music department in 2012 as an assistant band director and instructor of music. He was appointed associate director of bands in 2013 and made marching band director in 2015.

Earlier this year, Little was honored by the Jackson City Council for his long-standing service with the Jackson Public School system and his accomplishments at JSU. Now, it appears he has reached another career milestone. For that, Little gives special acknowledgment to Taylor’s tutelage and service to JSU’s band program and for shaping “three generations of productive citizens.” He also thanks previous directors William W. Davis, Harold Haughton Sr.,  Dr. Lewis Liddell and O’Neil Sanford.

“Without the tireless work of these outstanding gentlemen, this opportunity would not be afforded to me. Whenever presented with an honor or recognition, I have to thank others for attributing to my accomplishments,” he said.

The highly accomplished Taylor shared that he is proud to pass the baton to Little, before describing him as a young man who has proven to be well prepared for high-intensity leadership and one who has surpassed his performance expectations. He also summed up his sentiments toward JSU.

“Jackson State University has been good to me, and I would like to think the same in reverse. Since 1984, I have boldly stood on the shoulders of past directors. Now, it’s time for a new generation of directors to stand on mine,” said Taylor, who added that although he will miss his JSU family dearly, he is looking forward to boating and continuing as a true fan of the Sonic Boom.

Dr. Lisa Beckley-Roberts, interim chair of the Department of Music, called the change in leadership the beginning of a new era for the band and music department.

“Mr. Taylor has done amazing work building the program, so we will miss him immensely. But, Dr. Little will build upon that legacy and take bands at JSU to the next level,” she said. “He is very quiet because his work always speaks volumes. The entire band staff is phenomenal, and with him at the helm, I do not doubt that we will see the program reach new heights.”

A JSU alum, Little received his bachelor’s and master’s in music education from the university. In 2019, he completed a doctorate in urban higher education. As a youth, Little had his sights set on leadership. While a student at Lanier High School, he was tasked with band director duties at the age of 16. After graduating, he led the Lanier band from 2008-2011.

In a previous interview, Little said his relationship with students aids in his abilities as a director. “If you don’t know how to connect with them, and overall understand the trends of what’s going on now, you can miss out on a lot of things.”

Little articulated that thecontinued and further success of the JSU program is dependent upon a team effort from ”our amazing students, who put in the true work for our program.” He goes on to praise the “highly eminent band staff,” which includes “Lowell Hollinger, who has taken our wind ensemble to greater heights; Kevan Johnson, an outstanding educator and arranger; Chloe Crowley, who provides outstanding direction/mentorship to our Prancing JSettes; Courtney Lett, the glue of our internal operations; and Calvin Berry, a keen motivator to our percussion students.”