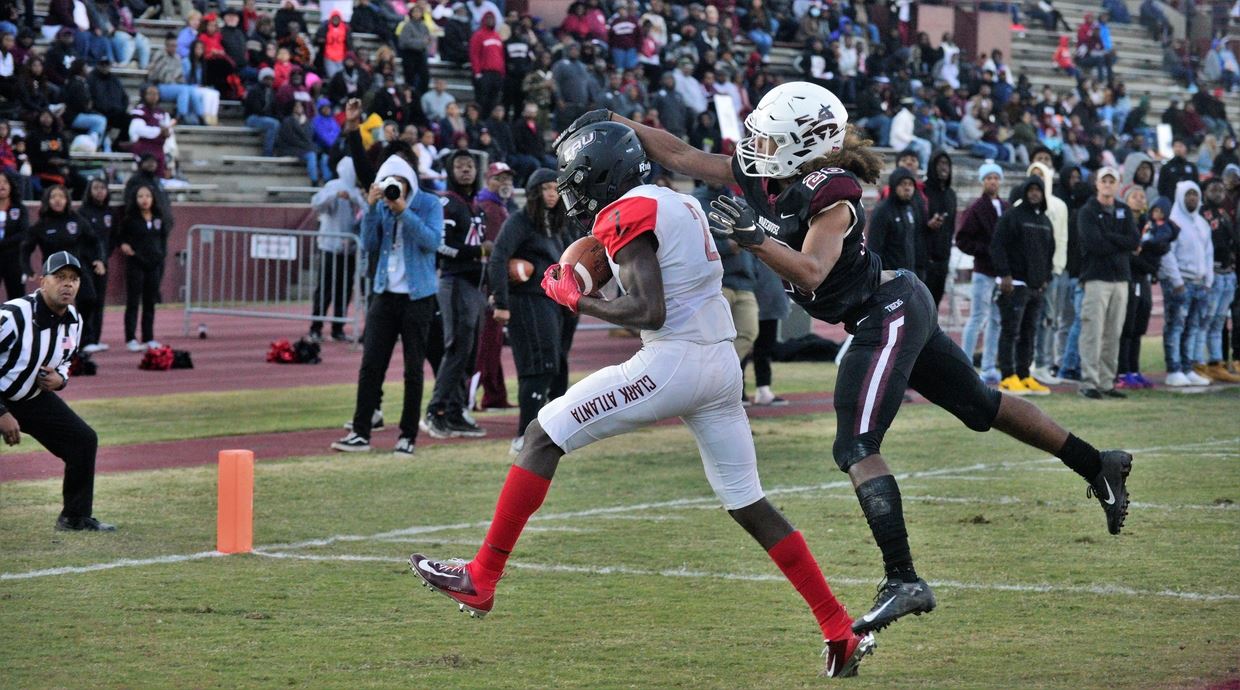 In a back-and-forth battle with Atlanta University Center rival Morehouse College, Clark Atlanta came up short, falling 40-39 in the season finale for both teams Saturday.

The Panthers had scored a touchdown with nearly five minutes left on a 2-yard TD toss from Charles Stafford to Jonathan Sanders to pull them to within one at 40-39.

Morehouse managed to get to the 45-yard line but was forced into a fourth down after Terrance Harris stopped Maroon Tigers quarterback Michael Sims after a 4-yard gain.

But when the Maroon Tigers lined up to punt the ball to CAU, officials called a substitution penalty on Clark Atlanta as they lined up with 12 players on the field.  The penalty gave Morehouse a first down and allowed them to run the clock out to win the game.

The Panthers had actually led four times in the game, all in the first half.

The two teams traded touchdowns again in the second quarter with Morehouse’ Frank Bailey rushing for a 4-yard TD midway through the quarter, and then Sanders getting his second TD pass from Stafford with 2:41 left before the half to put Clark Atlanta up 24-23.   But just 1:37 left before halftime, Sims hit Gooden again with Gooden on a TD pass, this one covering 23 yards, sending Morehouse into the break with a 30-24 lead.

Morehouse got a 26-yard Fernando Dela field goal midway through the third quarter to extend their lead to 33-24.   The Panthers then marched downfield again with Stafford capping a nine-play, 60-yard drive with an 18-yard TD pass to Kendell Wimberly to close the gap to 33-31.

Sims then capped the ensuing Morehouse drive with a 9-yard TD run to give Morehouse a 40-31 lead with 12:48 remaining.   Stafford then countered with his TD pass to Sanders with 4:56 remaining, but that’s where the CAU comeback would end.

Darius Blackmon led Clark Atlanta on the ground with 63 yards.

On defense, Justin Wade led Clark Atlanta with nine tackles, while Kenneth Morgan had eight stops (seven of them solo), and Jacquez Jackson had seven.  Terrence Harris, who came into the game as the SIAC’s second-leading tackler, had six tackles as did Tyrone Mixon and Kevin Williams.  Mixon and Williams each had a sack.

Morehouse’s Michael Sims threw for 275 yards and two TDs while rushing for another score. Santo Dunn rushed 23 times for 123 yards and a touchdown, and Gooden finished with seven receptions for 167 yards and two touchdowns.