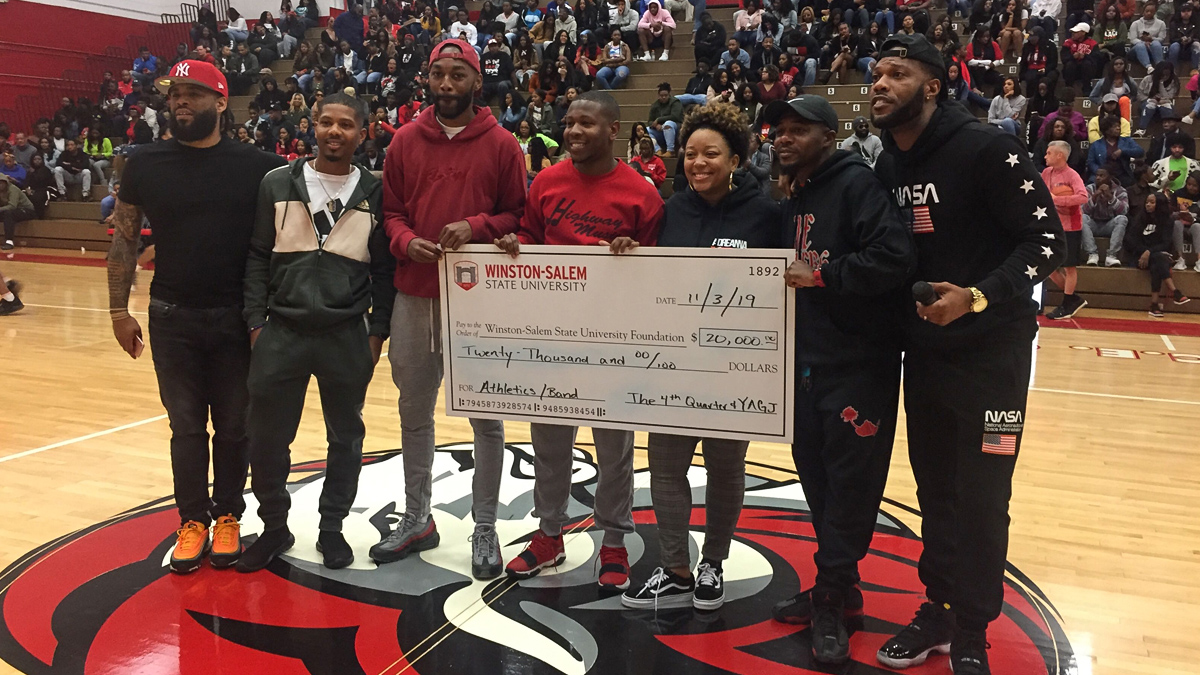 WSSU alumni use homecoming basketball game to give back

Saturdays are unquestionably the apex of HBCU homecomings, from Delaware State to Langston and all spots in between. Winston-Salem State is no exception to that rule, but a recent addition has given alumni and students something to look forward to on Sundays before heading back to the harsh realities of Monday.

The event is The Fourth Quarter, a students vs. alumni basketball game that is more than just a basketball contest between young bloods and old heads. What started as an idea for organizing a basketball event for homecoming has turned into a way for alumni band, dancers and cheerleaders to relive their glory days in the C.E. Gaines Center.

More than that, it has become a way for a group of young alumni to connect and give back to their alma mater.

The game was created by Oscar Ball III, a two-time alumnus of WSSU. Two of his close friends wanted to play a game during homecoming.

“We feel like we were the men on campus when we played and we wanted to see if the tradition carried on. But through hooping together, you start to build bonds, and that’s what inspired it.”

The first event was held on campus in 2017. It was free to the public. But then Ball and his co-organizers started to see the potential to do more, and pay it forward.

“We noticed how much it meant to the students after the first year,” Ball said. “We created bonds, people would hit us up, we started talking and having a little more of a relationship with the students so the second year we were able to give away about $5,000.”

“We still found ways to get other people to give. Some people are coming to giving laptops…smart watches..and we have vendors here who are giving out things,” Ball said.

The game has quickly become a staple at WSSU. Former WSSU hoops standouts like Jamal Durham, Justin Glover and WyKevin Bazemore have teamed up with former football players like Carlos Fields and Kerrion Moore to take on students. Alumni from Scarlet Lace (auxiliary dancers), Silky Smoove (flags) and the Powerhouse of Red and White (Cheerleaders) also get a chance to relive their glory days as well. Comedian and media personality “B-Daht,” a 2006 graduate of WSSU, served as alumni coach (his team won Sunday’s game).

Ball along with fellow alumni Adreanna Williams, Fred Mitchell, Devin Pass, Montrell Davis and Elizabeth City State alumnus Lance Sanders took things up a notch for the 2019 game. The group came together and raised $20,000 for the WSSU Athletic Department and the marching band, along with another $5,000 in scholarships.

Its an awesome accomplishment, but Ball and his accomplices have even higher aspirations going even further in the near future.

“We have to get to that $25k mark sitting in the scholarship funds so that we can keep this thriving and actually pay a couple students tuition every year, as well as continue to bless athletics as much as we possibly can.”

WSSU alumni use homecoming basketball game to give back